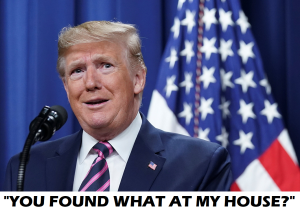 Among the many accusations made against former president Donald Trump since he left office are that he fraudulently inflated the value of business assets to obtain favourable loans, he deflated the value of other assets to reduce taxes, he attempted to coerce officials to alter election results in his favour and incited the attack on the Capitol Building to prevent the transfer of power following his election defeat.

As if all that wasn’t enough, he is now accused of stealing sensitive documents from the national archives and hiding them at his home in Florida.

As a former president who had the election stolen from him he should be given the benefit of the doubt. Anyone who won’t accept his explanation has to be an unamerican child-molesting devil-worshipping democrat.

True patriots who wish to help fund his legal team to fight the various false allegations made against him, and make America great again, can donate by cash, card or cheque. Thank you.

What actually happened was, multiple requests were made for the return of the missing documents. Some were handed over but despite further requests, Trump’s lawyers insisted that was all he had. After months of prevarication a judge signed a search warrant and the FBI retrieved the remaining documents from Trump’s home.

The fact that he took the documents, and shouldn’t have, is inescapable. The question is, why did he take them in the first place? Not even Donald Trump could seriously imagine that they had somehow become his own personal property. Apart from their monetary value, the obvious reason is leverage – ‘you see your way to dropping any criminal charges against me and I’ll see these things don’t fall into the wrong hands’.

Is there anyone who still thinks Trump puts his country first? One way of making America great again would be to have the Orange Man measured for an orange suit. 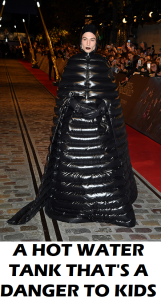 I didn’t know who the wanker was until stumbling on the news story, but it appears the science denying ‘actor’ has been caught out one too many times for his transgressions and so has pulled the ‘I’m a mental case’ card.

After being charged of burglary and acting inappropriately towards a 12 year old girl and grooming an 18 year old. The make up wearing shirt lifter has decided he better make out that he’s mental and seeking medical help so people feel sorry for him, instead of putting the cunt on blast for the paedo, toss rag that he clearly is.

I hope they lobotomize the cunt. 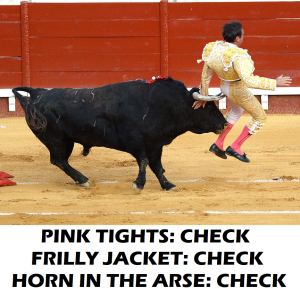 I hate the so-called ‘sport’ and its pointless cruelty, solely for the entertainment of a bunch of greasy Spicks and to let a few macho types demonstrate how hard they are, tormenting and killing animals in the sun. “Look Senorita, watch me ride a horse around in circles and stick spears in a cow!” Cunts.

LIkewise when they put chickens or ducks in a clay pot and the whole village turns up to throw rocks at it to set them free. Daft cunts.

The only redeeming feature of this activity is when some pissed up hero slips on the cobbled streets of Pamplona and gets trampled by a ton of angry beefsteak, or, as occasionally happens, the preening matador fucks up and gets 12 inches of hard cow horn rammed into his ribs.

Cheered me up no end to see this clip in the news this week; the oily cunts set fire to a bull’s head – just for a giggle – and then had to watch as the angry little bullock gored one of his tormenters to death.

How’s that for a flame-grilled quarter pounder, Senor Cunty? 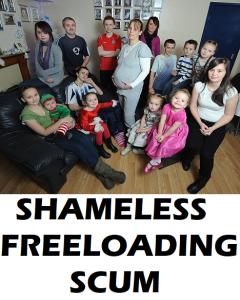 I had a drink in the local pub with a couple of other self-employed workers last night (03/08/22). We talked about many things, not least the problems of the pandemic lockdowns and little or no government support for certain types of self-employed companies, including ours!

We then moved on to discuss the current crisis’ – energy and cost-of-living (CoL). Both of which are decimating the two companies my friends work hard at trying to keep trading.

Then they complained about some of their staff wanting pay rises to cope with their own CoL problems, something that is impossible to do due to cashflow issues and rising costs of their own.

As a consequence some of their employees have left arguing that they would be better of on state benefits rather than having to put up with a low income that’s just above the minimum wage for their particular age groups.

Inevitably we then moved onto how the myriad of benefits people are now “entitled” to is not only undermining bosses of small businesses, but also workers as a whole.

Obviously if you’re earning £50k+ a year you’re probably not all that bothered about what other people earn or receive in benefits. But my two friends don’t earn that much and despite working all hours they can’t always afford to pay themselves a salary and often have to plough that allocated money into paying business bills.

When they heard the news about more government support for those people on means-tested benefits to help with the cost-of-living crisis (worth around £650) with top-ups available for certain other groups, it just made them even more pissed off.

It does seem that living on benefits is the way to go because in times of crisis – Covid, energy, CoL – you’ll more often than not receive a shedload of tax-free money. Whereas if you work but earn a lowish taxable salary or you’re self-employed and struggling, you’re likely to get sweet fuck all again!

I don’t know how many state benefits there are available these days, but in the link below are a few (I don’t include state pensions because they’re definitely not a benefit, but have been earned through a lifetime of paying Income Tax and NI contributions)

Some benefits are means-tested, some are taxable. Quite often if you work and earn a taxable wage that is just outside of any of those entitlements then you’re very much on your own. And that includes the extra Cost of Living handouts (of around £650+), which again is going to those people on benefits. However, those same people who do work and not entitled to anything will be expected to pay for it all through higher taxes and NI contributions sooner or later.

And on the subject of pensions – again if you take out pensions early in your working life because you want to think about a comfortable retirement, you often end up being means-tested come your retirement and your pensions are taxed yet again. Whereas there are many cunts out there (and I know a few) who have never worked but still end up with plenty of benefits when they reach “retirement” age, almost to the point of receiving more money than those silly workers who spent 30-40 years paying into various pensions and taxes and came out worse off!

And more often than not you’ll get the charity groups (you know, those with CEOs and board members earning 6 figure salaries) moaning on MSM and social media that the government isn’t doing enough for the poor and should therefore give all those on benefits extra cash, courtesy of the Taxpayer.

As a consequence, my two friends have said they’ll give it a few more months and if things don’t improve they’ll jack it all in and live on benefits instead (although obviously because they have worked and may have savings they may not be entitled to quite so much compared to some cunt who has never worked but has 8 kids!)

I know I’m making quite a few generalisation here, especially with regards benefit allocation (those genuinely in need due to poor health for example). But the fact is we do seem to be living in a society where living on benefits is now regarded as an essential entitlement (lifestyle choice?) and nothing to be ashamed of, just so long as the Taxpayer doesn’t complain and just keeps on paying more and more taxes to pay for it all. 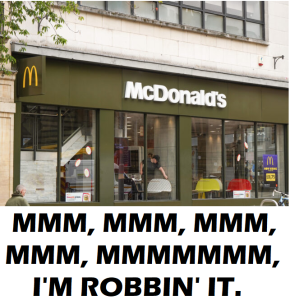 A ‘flashmob’ (which appears to mean loads of dark skinned types) turned up at a McDonald’s to rob the food and pop and abuse staff and customers.

It was Nottingham, here in Blighty.

Diversity is our strength. Well it seems to be the case for those involved, as according to the article, no cunt has yet been arrested.

Mind you, if a honky had said ‘white lives matter’ during the rampage, his feet wouldn’t have touched the fucking ground.

And well done MSM on more or less ignoring this story. Fucking shithouses.