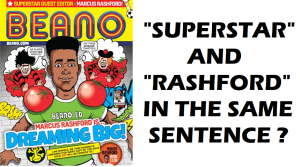 D.C Thompson and their Beano comic are cunts.

Another British institution that is now riddled with the woke disease.

Dennis The Menace is now just known as Dennis. In case the word ‘Menace’ implies that he is some sort of sex pest, and it ‘offends’ the Me Too Femstapo psychos.

Walter The Softy has also been jettisoned. In case he offends the ever sensitive LGBTQ ‘community’. Mind you, what doesn’t offend the cunts?

And, it gets worse. The iconic Bash Street Kids have also been woke bombed. Old favorites, Fatty, Wilfred and Spotty have all been axed. And there are now three new characters: two are female, one is peaceful, and all are black.

It is also now ‘mandatory’ to have a black character on the cover of every issue. Even Marcus Rashord now has his own story in it. And, naturally, the Guardian has an orgasm about it. I am just glad I am old enough to remember old style comics like Whizzer and Chips, The Dandy, and a time when this vile woke crap didn’t exist…

104 thoughts on “D.C. Thompson and Their Beano Comic”