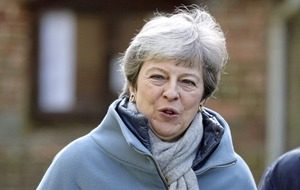 “Approve my deal and I promise to buy a new coat…”

She must be leaving a trail behind her wherever she goes.

As I’ve said before, Theresa May is a shitty gift that won’t stop giving. After forcing her ministers endure more than seven hours of being locked in a room with her, on the pretence of trying a way to resolve the shit show that SHE caused, she ignored the advice of the majority of ministers, which was to leave the EU with no deal (which is also what the majority of the British people want), and instead went with the advice of the minority of ministers, which was to go back to the EU, YET AGAIN, and ask for ANOTHER extension to our already delayed leaving date.

The word, “Traitor” isn’t strong to describe this filthy, lying, ignorant, duplicitous, deluded fucking whore. “Brexit means Brexit”, she said after being elected leader of the Conservative party. Although in private, I’m quite sure she added, “like fuck it does”. The ONLY truthful thing she has said during her tenure as leader of the Conservative party (I refuse to call her the Prime Minister, since she long ago lost the right to be considered such), was “I will be a bloody difficult woman”. And even then, she was being disingenuous, because she was talking about being a difficult woman with the EU, when what actually meant was, “I will be a bloody difficult woman with everyone who voted to leave the EU, because I have no intention of delivering Brexit in any form”.

There is no humiliation this piece of shit is not prepared to endure to achieve her goal of destroying Brexit. Personally, I think that if she wants to be publicly humiliated on a daily basis, that’s her business. But this wretched creature is intent on humiliating the entire country as well. And that, is intolerable. Look at shit that was thrown at her over her mong dancing when visited Africa last year. Most politicians would simply have ignored it, not this dick though. She decided to try to take the piss out of those taking the piss out her by mong dancing onto the stage, grinning like a coked up twat.

She is, without doubt, the WORST occupant of 10 Downing Street the UK has ever had to suffer. And considering her three immediate predecessors were Tony Blair, Gordon Brown and David fucking Cameron, that takes some doing. She makes Neville Chamberlain look like the world’s greatest ever statesman. At least he was acting out of naivety. May is an out and out traitor. From day one, she has deliberately gone out of her way to sabotage the democratic will of the British electorate. This lying witch shouldn’t just burn in hell, she should be dragged to Traitor’s Gate, be stoned, flogged, kneecapped, burnt at the stake and then hanged, drawn and quartered.

She hasn’t just killed Brexit, she has killed British democracy. And damn this cunt to hell for it.

There’s been a lot of strong things said lately about the Prime Minister and her woeful capitulation agreement.

Some think she is a traitor and should be dealt with accordingly. 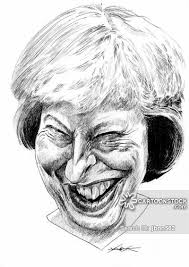 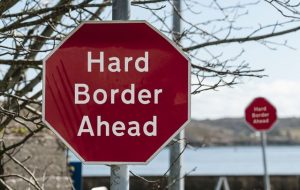 Hello children. Are you sitting comfortably? Boris! Take your hands from around Dominic’s throat, you wicked boy. Alright. Now I’ll begin. Today’s story is about “back” words. You can find lots of “back” words in a big book of words called a dictionary. Let’s look at some of them shall we. First – backbone. Amber, dear, do you know what this means?

I’m not sure Miss, but my dad says people called fucking politicians who meet in a big house haven’t got any fucking backbone. What’s fucking Miss?

Never mind that now, Amber. Let’s move on to backward. Jacob, would you like to do this one?

Yes, Miss. Backward means being thick and stupid but my dad told me not to use it outside the home in case the thought police heard me and took me to a politically correct – speak induction centre. My dad says all fucking peacefuls are backward because they have no fucking music, literature or art and want to live in the fucking 9th Century. What does fucking mean, Miss?

Never mind that now Jacob. The next word is backstab. Michael, I think you will know this one.

Oh, yes please Miss. It’s like when Ian told me not to tell anyone about having his hand up Anna’s skirt during milk break today but I came and told you Miss. He said he was looking for his pencil but Anna said he was finger fucking her. What’s fucking, Miss?

Alright. One last “back” word before I explain what fucking is. This word is backstop. Any ideas children? Oh my, you’ve all got your hands up! Well I’ll have to choose one of you – David, you intelligent boy, tell us what backstop means.

Well Miss, backstop is a word that means nothing in itself and was dreamt up in a backroom by Uncle Ollie and Nanny Theresa while they were sitting on their backsides trying to get through the backlog of work caused by their backsliding and backtracking on the Brexit negotiations. They were afraid of a backlash from everyone so invented the word backstop which means the same as fucking, Miss.

What do you mean, David?

Well Miss, Ollie and Nanny T have promised Jean-Claude to give the British voters a good fucking up the arse without them realising it until it was too late so they decided to create the word backstop as a synonym for a good fucking up the arse. My dad says Uncle Ollie likes to give Nanny T a good backstop with lots of backflow over a chair in the backroom. What’s backflow, Miss? Treacherous cunts. 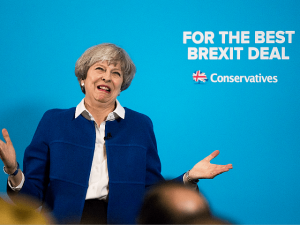 Hello children. Are you sitting comfortably? Then I’ll begin. Today’s story is about Nanny Theresa and her box of Brexit plans.

Now, Nanny T, according to Reuters, spent last Friday showing her withered old box to a lot of people and trying to get them to all agree that it was a lovely box full of wonderful plans. Well, children, when we try to get everyone to agree to something this is called “finding a consensus” and it involves all the people who Nanny T thinks are important.

On Friday Nanny T tried to find a consensus of her ministers, her divided Conservative Party and the Northern Irish lawmakers who prop up her minority government. But naughty Nanny T forgot some people didn’t she, children. Can you guess who she forgot? Come on, hands up if you know the answer.

Yes, Boris – please Miss, is it pikey bastards? Good guess Boris but no, that’s not the answer.

Yes Jacob – is it Albanian criminals Miss? No, Jacob – good try but not correct.

Yes Nigel – is it peacefuls driving on the pavement Miss? No, Nigel.

David, you’re a clever boy, who do you think naughty Nanny T forgot about? Is it spineless senior police officers Miss? No, David.

Well children, it is a difficult question so I’ll give you a clue to the answer – 17.5 million voters. Treacherous cunt. 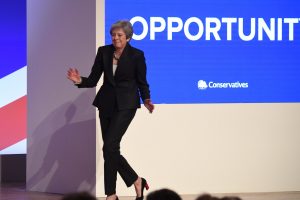 Theresa May the Dancing Queen.

And in the body of her speech ‘Support my plan or we may not get a Brexit’ This sounds like a threat to me, but then she has never actually put forward a convincing argument or UK negotiating position, just kept on giving without ever digging in.