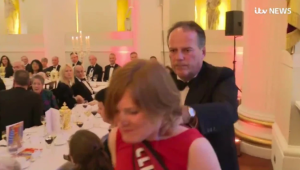 For any cunters who have been living under a rock for the last 24 hours, this is the fella who forcibly ejected a dopey Greenpeace “activist” from an formal dinner at the Mansion House on Thursday evening in order to prevent said fuckwit from approaching the top table and spewing forth a load of eco-bile to the assembled throng.

He has since come in for a great deal of flak from the leftie/feminazi/ecotwat brigade because he apparently used “excessive force” in so doing. Utter bollocks. Jesus H, if anyone was listening to that fucking daft bint Fogarty on LBC this afternoon, you’ll know what I’m on about here…..

BECAUSE HE APOLOGISED FOR IT.

Nominated by Ghee The Witches

Mark Field is certainly NOT a cunt. He did what any decent person would have done when demonstators stormed the Mansion House to potentially threaten life and limb of the eminent people present.

Even the security guards – where the fuck were they incidentally? – said he grappled the demonstrator in question exactly as they had been trained to do.

No, Field’s behaviour was in no way cuntish – but the actions of the Foreign Office in suspending him was cuntish in the extreme. And who is the Foreign Secretary? Why, none other than potential PM Jeremy Cunt – sorry, Hunt – who has just proved to all and sundry that he’s more than a wee bit weak and wobbly.