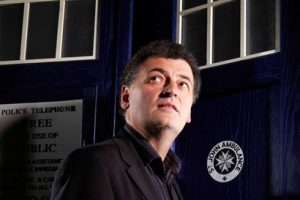 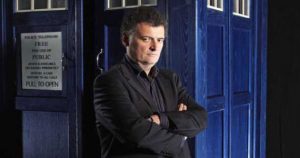 The pube headed one has now told Doctor Who fans who have complained about the all new feminazi PC lady Doctor to ‘Shut the hell up!’…. The arrogance of this wankstain is astounding…. Openly refers to himself as the ‘Showrunner’ of Doctor Who… Not even the infamous John Nathan Turner did that… Moffat also seriously believes his convoluted PC obsessed dogdirt has made the show better and that every event or story in history, time and space featuring blacks, gays, wimmin and lezzzas is plausible…

I wouldn’t blame Capaldi one bit if he decked this smug self satisfied spunkbubble, for ruining the chance of a lifetime and destroying a TV legend into the bargain…

And that Gatiss is a cunt and all….

I’m praying the new ultra PC doctor Who takes a huge ratings hit, Moffatt is a 24 carat cunt, nothing would please me more than to see this once brilliant TV programme spectacularly bomb!….
Watch the shit stains over at the guardian and the not so big up the new series of DW for all their worth….As a poster said In a previous thread ” you can tie a bow around it but it’s still a turd”…. 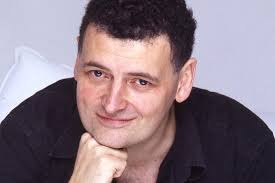 I’m nominating Stephen Moffat for a cunting. Due to the fact the Scottish twat turned the Master in to Missy towards the end of last season, I stopped watching, on the basis that Stephen Moffat is a politically correct, far left shithouse, with pubic hair on his head. He couldn’t write the alphabet without adding some kind of left wing slant to it.

When the new series started the Saturday before last, I decided to give it a chance, just in a case a miracle happened, and he’d written a script that was actually entertaining, rather than a load of left wing drivel. I should have known better, but I’m nothing if not optimistic. I had to turn it off after Missy made a comment to Clara about, ‘when the Doctor was a little girl’.

Moffat seems to be oblivious to the fact that he is going to ruin a much loved show, with his obsession with making at least one incarnation of the Doctor female. What is it with left wingers, that makes them feel the need to piss all over once great television shows, by adding a left wing agenda? With Russell Davies, it was about promoting faggots and faggotry. With Davies, it’s about promoting ‘gender reassignment’. On a couple of occasions, Missy referred to herself as a ‘Timelady’. Considering she used to be a man, it would be more accurate to call her a ‘Timetranny’.

From now on, I’m only going to watch the original series of Dr Who. Hartnell through to McCoy. They may have been corny as fuck, but they were at least unburdened by any PC bullshit. 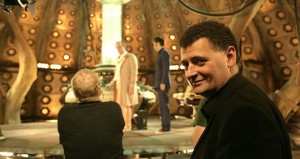 Steven Moffat is a cunt. This smug, self satisfied, BBC royalty, nu-Who twat has ruined one of my favourite boyhood TV shows. His plots and stories are appalling. That River Song bollocks that lasted over two series (If she says “Spoilers” once fucking more….).

The frankly ludicrous story arcs and the substandard villains he has created. His terrible to non-existent use of classic Doctor Who foes (He has never written a decent Dalek or Cybermen story, and I dare say he never will!). Moffat claims to be a longtime Who fan, but I don’t think he gets it at all. His episodes of that Sherlock Holmes thing are also shite.

Been watching “Genesis Of The Daleks” featuring the great Tom Baker on The Horror Channel. That’s the real shit.

And that presenter on that particular channel (Emily Booth, I think). I’d really give that one…