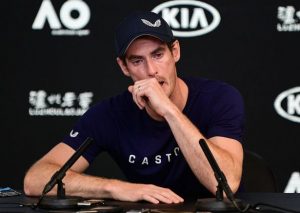 An emergency triple nomination here:
1) Andy Murray – announcing his retirement at a press conference. Firstly walking out of the conference because he was so upset. Then coming back in and droning on about all his problems, looking down at the table and sniffing loudly with his fake tears to show everyone how upset he is, stupid little snowflake twat. Well, I am delighted by this news, as we won’t have to look at his miserable face or hear his tiresome whingeing bullshit anymore.
2) SKY news for making this their headline news and going on about it for 10 minutes.
3) Tennis, for being a boring load of crap, and the cunts who watch it.

If its not enough to see a man blubbering better than Steve Smith after the ball sanding scandal, what it is that this cunt is so upset about?

He has pranced around the world on a regular basis to knock a few balls around, and now his hips gone bad he needs to give it up.

No doubt the cunt is going to now make more money than all his career now on Endorsements and surprise appearances on the BBC on anything from The Olympics to A question of sport – why can’t this cunt just grin and fuck off.

And take his mother with him.

Cunts the lot of them.

Just popped orn to cunt Andy Murray for being a blubbing cry baby cunt but many in there all ready so suffice it to say “Man Up you Snivelling Cunt”. Can stomach and even admire a cunt but not a snivelling cunt fingering his sponsored logo emblazoned baseball cap to camera while droning orn in his flat tear jerked jocko monotone packed full orf sports and street cliches………sniff……..yeah. Cunt. You have not lost a leg or an eye. Stop playing tennis for megabucks which you do not need and the pain will lessen and if you need an op so be it. Try stepping orn a land mine for comparison. Cunt. 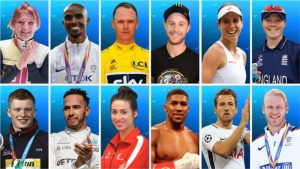 Er… Who the fuck are these cunts?

Sports Personality of the Year – one of the most high-concentration gathering of cunts you’ll see ‘twixt this world and the next. I agree with many others who suggest the awards should be renamed – perhaps ‘De Facto Cunto’, ‘2017s Biggest Cunt who Runs on Grass’ or more simply ‘The Sporting Cunt’s Cunt’.

If you even care, the nominations for this year have been released (see how many you can identify in the above picture)

This is one of those seismic events where the cuntitude is exhibited on so many levels:

2. A large hall packed with a vast array of overpaid, over-inflated egos

3. The title of the fucking award. The shortlist is always picked based upon achievement, so why the fuck argue semantics on it being the ‘sports personality’ award? What’s ‘personality’ got to do with big-mouthed virtue-signalling dour cunt Andy Mugray winning it three times? Alternatively, just make it genuinely about personality – nominate people like that snooker player who said all the Chinese are cheating cunts, or the pub-league darts player who can fire an arrow at the treble 20 directly from his arse.

4. Clare Balding wheeled out to bark her way through proceedings with all the finesse a Tourette’s sufferer on acid

6. The usual intersecting VTs foisted upon viewers affording coverage to the flids, the minorities, the wimminz and all the other sports which you either shake your head at in disbelief or laugh uncontrollably at the shiteness of

7. The annual mass-fellation of Usain Bolt 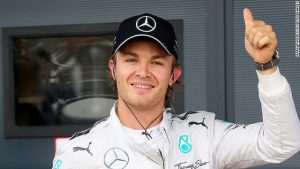 Nico Rosberg luckily beats Lewis Hamilton (who is a much better driver than him) because Lewis’ brand new engine blows up and costs Lewis 25 points and Lewis also messed up a few starts and lost points. Yet the German only beat Lewis by 5 points. Realising he had no chance in the future he retires and I think it’s a bit cowardly, something I wouldn’t associate with the Germans.

Anyways Nico is a good driver and has his moments of brilliance but he is lucky to be World Champion. 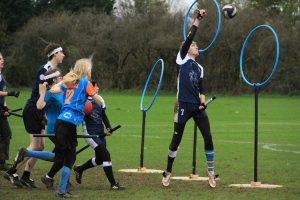 I would like to cunt quidditch – not the game in the Harry Potter films but the ‘sport’ played in the real world by cunts.

It has its own official rulebook a world cup and a UK premier league is about to start up. The game is non contact and mixed gender so ideal for student types.

It’s another way for snowflakes to escape the awful world they find themselves living in. What better way to forget Brexit and The Trump than to run around with a broomstick wedged between your arse cheeks.

Wikipedia have a page on it if you can be arsed.

The tidal wave of cuntishness continues.

Maria Sharapova is a cunt…

I’d shag her senseless though….