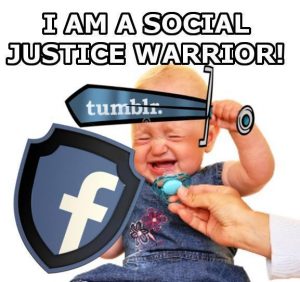 What fucking bunghole did these annoying little pieces of feces crawl out of!?
How can we either flush them or make them crawl back-up one another’s asspipes?
Particularly, the putrid puss-in-the-brain feminists and their male members of tyrannical Social Justice Wussbags.

“I agree with you snookums. Women are better than men.”

SJW syndrome is a mental disorder which effects all ages, races and genders.

SJW: OMG HOW DARE YOU OPPRESS ME WITH YOUR WHITE MALENESS GET AWAY FROM ME YOU RACIST, RAPIST PIG, CHECK YOUR PRIVILEGE!”

White straight male: All I said was-

White straight male: What are you talking abou-

The whole whiny whinority lot of SJW’s are nothing more than extremely narcissistic, naive, sheltered infants who never check any facts before making themselves look stupid, and then get so emotional they throw tirades and cry. It’s pathetic. Society is doomed with this generation. Imagine what their children will be like!

And the older ones are just as bad if not worse especially, all of the professor pieces of shit and faculty fucks that encourage, support and create these little cunts. They should be the ones who have the shit kicked out of em, and then beat-to-shit again for making a mess.

A cunting please. A cunting for the intelligencia that approves “Counter Demonstrations”

It has been known to man that throughout the course of history, if you put black powder and a naked light together, then somethings gonna happen.

You dont have to be a genius to realise that this lesson has perhaps failed to register with the numbskulls who approve “Counter Demonstrations”.

If an application comes in for a march on….say “We like bananas”….and 2 days later, a request to march in opposition as “We fuckin hate Bananas” Then surely it is obvious that when the two meet, there is gonna be trouble.

Now forgive me for being a trifle slow here. Does that seem a common sense decision? Nah…me neither. ( Some Cunt WANTS trouble )

Now think of all the demos that are to be held in Londonistan. The initiators, ( those who wish to air a grievance ) Will be allocated a date time and place.

Sure enough, a day or so later, ( when the word has got round ) A counter demo of the unwashed will be approved. It will be held at the same time and the same place as the “opposition”.

I have noticed that “Counter Demos” are always in opposition to something that sensible reasonable people would want. That just cannot be allowed.

In Londonistan, our beloved leader has the power to approve or disapprove a march. It would be reasonable to expect that the decision to allow a “Counter Demo” would be based upon common sense, the desire to preserve peace, and the avoidance of unnecessary death and destruction upon the streets.

Suque Khan ( Dadee was a buz driver ) seems to not have the ability to exercise much in the way of common sense. He seems only too keen to allow chums and apprentice anarchists to take to the streets with his blessing.

Surely in this day and age, it would not be too difficult to have a rationale that takes the lunacy out of political decision making of this nature.

Look overseas to see that this IS entirely possible. Kim Yong Un seems to have no problems with any ” Counter Demonstrations” he simply shoots the fuckers. 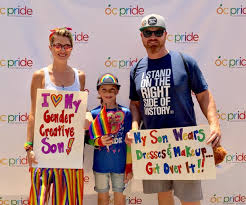 Matt and Lori Duron are utter cunts.I think the picture above speaks for itself.This is their 10-year-old son C.J who is “gender nonconforming or gender variant”.They took him to a pride event and anyone who is familiar with pride knows that it is overtly sexual and filled with cunts wanting to shock and disgust people and blame it on homophobia.As you can all probably guess the Mother Lori has written a book based on a blog called “Raising the Rainbow” discussing her son’s fondness for girl clothes and toys despite him also liking boys clothes and stuff.I tried reading the blog but it was badly written narcissistic garbage (No surprises there) but was filled in the comments section with vacuous brown nosing comments with key buzz words such as “inspirational” and all that utter new age wank.I bet these arse licking commenters would cheer if the parents made their son shove a used tampon up his own arse!

What perfectly illustrates these morons despicable lack of self-awareness and responsibility is their response to Hollywood Actor James Woods tweeting to the above picture “This is sweet. Wait until this poor kid grows up, realizes what you’ve done, and stuffs both of you dismembered into a freezer in the garage “.They accused Woods of attacking their son and did not mention or seem to comprehend he was criticizing them as parents for blatantly using their child in an exploitative fashion in order to further their Social Justice agenda.Turns out the boy has been documented by his parents publicly since 5.Fucking 5? I bet if a child was being raised in a religious cult then these modern parents lookalikes from VIz would gasp at how awful it was even though they are guilty of the same sort of coercive abuse.I love how they and the Twittermongs and their fans such as shirt lifter Neil Patrick Harris don`t appreciate that exploiting a child in such a way is likely to cause them severe psychological problems down the line which is what James was getting at.

The funniest irony is that these so called parents would not let their son stay at Pride when they went home.So that is where they draw the line.At least there is one I guess.Fucking pitiful excuse for parents!CUNTS!!!!!!

I’m currently serving 24 hours in FB prison due to meme I posted in one of the groups I’m a member of being removed, after some snowflake cunt reported me. It was a cartoon of a pig fucking a muslim, with the words, “That’s the way Allah, Allah I like it”.

The post I put it on was by some muslim gobshite bragging the UK would be taken over by muslims and we’d all become slaves.

(Ed: Provocative and insulting to all non-muslim British people. Slavery is a crime in the UK.)

Now I don’t really give a fuck about being blocked, I have a life outside FB. Besides, I see it as a badge of honour. I’ve offended at least one lefty, and that pleases me.

What annoys me, is Zuckerberg’s double standards. He’s quite happy to allow the most vile, left wing bullshit to be posted without sanction, but when those of us who are NOT braindead, lefty dickheads post something, we don’t even get to appeal. There was also mentioned in the message that they would delete my profile if I keep doing it. Big fucking deal. 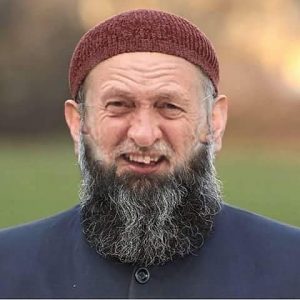 Corbyn is a big egotistical cunt and on his demise I will pour myself the biggest Jack Daniels ever. Even though the cunt may have made a video for the armed forces, on armed forces day, it still doesn’t excuse the fact the hippy fuckster would have rather been at that shite festival than attending Liverpool or any other event the cunt was invited to. I loathe the cunt and his followers with passion and I do fear for the future of this country, if by some chance he were PM. May gets me more annoyed and angrier day by day, but I would still rather have that useless split arse than him. Cunts, the lot of them.

On a brighter note I was having a tea in a cafe today and I saw a massive pair of tits in a tight white shirt. Good job the Mrs wasn’t with me at the time.