A cunting for Alan Sugar. OK, he is already a cunt but, along with a previously cunted Louis Hamilton he is a spineless cunt.

SrAlan call me Lord Sugar tweeted (where else?) an attempt at humour, saying the Senegal football team looked like Spanish sunglass sellers. Ho Ho. Perhaps they do. I have no idea. Cue fucking outrage from the twatterati, looking for offence. RACIST.

Now, had he said the Swedish team looked like ski instructors/porn stars/double glazing salesman would that be racist? No. And this tweet wasn’t racist either.

At first he held firm but eventually apologised. For what? Piss poor jokes? No, for inadvertently making a racist comment.

Sugar is spineless cunt. The twatterati looking for offence should have been told to fuck off. They weren’t so LordS’rAlan Sugar, you are a cunt.

The BBC wants Alan Sugar to go on an ‘unconscious bias’ course after he tweeted about the Senegal football team.

What sort of bunch of cunts does it take to understand that if the ‘bias’ is ‘unconscious’ then there fuck all you can do about it because it’s – errrr – unconscious. Seems the spineless PC (no relation) cunts at the Beeb are caving in to calls from Senegal for Sugar to be sacked from his job at the Apprentice.

Well, I think they should tell Senegal to fuck right off because I’m damned sure that cunt on the left sold me a pair of Ray Bans last year!

It’s BBC Apprentice 2017. How a year has flown by since the business equivalent of Britain’s got NO talent reappears on our screens. The best young business entrepreneurs Britain has to offer for a 13th year running. I hear the Chinese, Japanese, Indians, Germans, Americans….OK, the whole fucking world, shitting their pants, as UK plc unleashes these titans of business acumen against them.

Fronted by east end wide boy Sir Alan – Lord Sugar, a man with a bad dose of titulitis. I do so wish one of the apprentices has the balls to call him “Al” or “mate” and watch him go apoplectic or just to call him ‘Sir Alan’ instead of ‘Lord Sugar’.

The king of the one liner, has some ‘great’ new material such as  “Forget Brexit…Here, I’m the one who decides who remains and who leaves.”  Such quality, perhaps he picked that out of Sir Brucie’s suit pocket from his grave.

This year’s line up of 18 apprentices are a veritable smorgasbord of British society. A posh ‘Tory Boy’ as he’s known, who worked for ‘Call me Dave’. A double barrelled named woman, a few other whiteys, probably Northern and Southern wideboys, a generous spattering of superwimmin, an Alan Carr/Graham Norton look-a-like, a black woman, two peacefuls, and a Chinese dude.

The BBC having duly ticked all the diversity boxes stuffed a cherry on top with one of the peacefuls being a hijab clad woman who describes herself as an ‘ independent woman’.  Go there BBC, liberty, equality and freedom for the peaceful  sisterhood. Next year can we expect a black sheet and matching pillowcase peaceful sister demonstrating her freedom of expression and independence?

Any bets on who will win?

I will go for the Chinese bloke if it’s purely based on who is hardest working and best in business, although if he hasn’t already made his first billion on his own, then he may just be a token entry. Otherwise, the hijab wearing peaceful looks promising…..as I seem to vaguely remember one of those winning a competition on the BBC before…..although I maybe wrong…. because they never gave her much publicity afterwards. 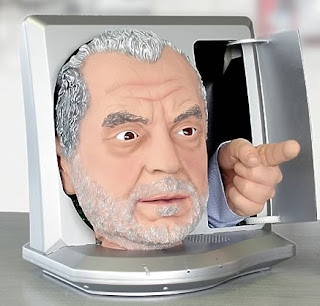 Alan Sugar has in his own words been sacked,
oh and is a cunt with his lips firmly around
Gordon Brown’s tiny jock cock the cunt.