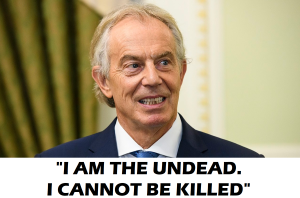 Tony ‘The devils wankstain’ Blair and his ‘Institute’, which is ‘non-profit’ and therefore completely innocuous, is already calling for a 4th booster of the same shit you’ve had already. And a vax taskforce. And to ‘cajole’ the unjabbed. And a thorough vax pass system.

I don’t really care what his bellendry institute says. My point is, why the fuck does this shit even exist? Who is funding it? Why? And what skin in the game does he have anyway!

Should be investigated for corruption, then the doors welded shut with him his fucking repugnant family inside, and carpet bombed into oblivion.

Link to some shit about Blair and his big mouth.

(Notice. Since processing this Nom just over a week ago, we now learn the cunt has become a Knighted Cunt. Given that this nom is about to go live in the next hour, you may as well include his knighthood for a cunting as well and save the bother of creating a new Tony Blair nom just for that. Cheers – Day Admin) 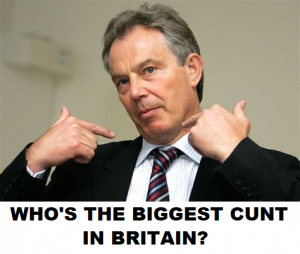 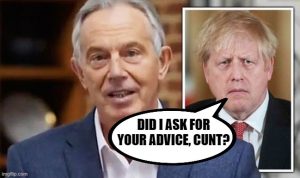 A limp-wristed-Qweer-Charmer-Is-My-Hero cunting please, for the former Prime Minister and Britain’s favourite ballerina, A. Blair, who like that other demented old has-been David Beckham, just can’t leave the stage.

This time the effete elder statesman is giving Boris his ‘advice’ on Covid 19 – that testing is the “only way out” of the lockdown:

Of course, you can see why the prancing old queen has come mincing out of the woodwork. His little crush, Starmer, is likely to assume the leadership of his tottering party this week, and if Blair can vouchsafe advice to the current Prime minister, he will have no qualms doing it for this Blairite mini-me.

If Blair wants to give out advice, his best bet would be to become an agony aunt for a poofters magazine, giving advice on anything from medical problems like arse grapes to relationship advice (survivor of an abusive marriage to wee Gordon) and his specialist subject – makeup advice for elderly queens.

The biggest cunt in Britain stopped being PM 13 years ago. Now he just needs to shut the fuck up. 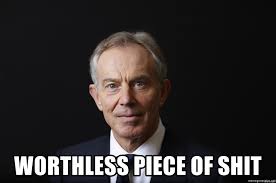 Good afternoon. This is IsAC’s political correspondent Ron Knee, about to bring you the result of the latest referendum, which of course is awaited with huge excitement and interest the length and breadth of the nation.
You’ll recall that the ballot paper required a simple ‘yes’ or ‘no’ answer to the following question;

Polling during the run-up to the vote has indicated that the outcome was unlikely to be favourable to Mr Blair. It must also be said that his comments on Brexit which have immediately preceded the vote have probably not added to his popularity. Speaking at an event at King’s College London, Mr Blair claimed that if still PM, he would have ‘united the country’, after stopping Britain’s exit from the European Union.

Unbelievable as it may seem, Mr Blair is of the opinion that after traitorously ignoring the result of Britain’s greatest ever exercise in democracy, he could then have dealt ‘with all the problems that persuaded voters to vote leave’ in the first place. Yes, Blair would single-handedly have persuaded the bloated, undemocratic EU to reform itself root and branch; being in orbit around planet Zog, Blair still believes in the quaint notion that turkeys will actually vote for Christmas. Luckily for us, fellow cunters, we know that in spite of vicious and determined attempts by the establishment to overturn the referendum result, events in December 2019 proved that we still live in a country where the will of the majority can prevail. Indeed, I can now confirm that the latest result has been declared, and as IsAC’s man on the spot, I have the honour to announce to the nation that it is as follows;

So, there you have it. The astonishingly out-of-touch, arrogant and delusional Mr Blair has been formally declared an utter cunt by an absolutely crushing majority. Without doubt, Blair is now Britain’s most irrelevant politician, so completely last century’s man.
Off you go then Tone. You’re talking, but only to yourself. Nevertheless you can take some consolation from the fact that you’ve at least succeeded in uniting the nation in one respect. EVERYONE fucking well loathes YOU.

This is Ron Knee, for IsAC, returning you to the studio.

*It has been officially confirmed by Mr Blair that he voted ‘no’.