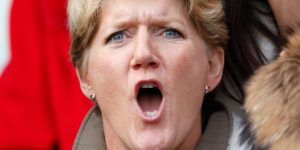 Balding again. I really really can’t fucking stand the cunt. Along with all the BBC, C4, BT posh shit that of course naturally slithers into her heron sized gullet. Horses, Dogs, anything else she can boot someone else out for (Inverdale).

Todays trigger was accidentally tuning into and seeing the hideously posh future captains of industry and rapists of our world embarking on their monumental task of rowing up a river. A river! And who was there (and I knew instantly who it would be) to spit in my eye?. Desperate Dan again. Once again with her mock jolly hockey sticks banter and “I’m continuously amazed how wonderful it all is” delivery to accompany her disgusting whipped and lacquered Ray Mears quiff.

I’ll never rest easy till I see that cunts head on a spike in the bottom of my garden for the birds to feed on. I’ll chuck the rest out for the street foxes.

While I’m here, I want to nominate Clare Balding for a cunting. To say this man faced dyke is overexposed is like saying that Pepsi is a bit fizzy. In the past few months she’s been at the Lord Mayor’s parade, she’s been at the winter Olympics, she’s been at the boat race and now she’s presenting the commonwealth games. She even presented Crufts for fucks sake. Though that’s probably because she wasn’t allowed to compete. If some perv flopped his cock out in front of the BBC studio at Salford Quays, she’d be there presenting it. And it’s not just the fact she’s rarely off our TV’s, there’s also the fact that she’s presenting at events she knows fuck all about, and comes out with the most ridiculous and inane comments. The kind of comments that Naga Munchetty would consider intelligent.

It wouldn’t surprise me if she turned up at the World Cup. I’m pretty sure she’ll be in Tokyo for the 2020 Olympics. Though, considering muff diving is NOT an Olympic sport, she should be kept well away from the aquatics centre. Horse racing, that’s what she’s qualified to present. Her dad worked at one of the Queen’s stables and she was raised around horses. Apparently though, he had to quit because the grooms kept trying to feed her sugar cubes.

Clare Balding, get the fuck off my TV screen. You cunt. 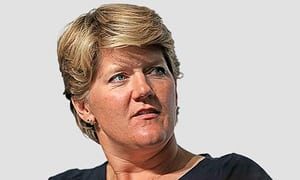 Clare ‘Bernard’ Balding has somehow transmogrified from being a merely annoying horse-loving sportscunt commentator, to an al-BBC monstrous box-ticking pet project used to champion the usual causes of Wimmin, Homos, and Fruits. But her cuntitude is far deeper than the sum of those shitty liberal parts.

Her shouty-cunty faux-startled delivery alone is usually enough to grind the gears of even the most transcendental Buddhist. However, she unbelievably took it up a further notch this week by forcing her ‘outrage’ upon viewers at the fair and just disqualification of dismal snowflake and Winter Olympic skating failure, Elise Crashtie. Quite what Bernard Balding was so exasperated about is beyond me – just commentate on the unfolding events and spare us your fucking shit-opinion, you shit-haired cunt.

In fact, therein lies the real cunt – similar to recent cunting analysis on newsreaders like Tom Bradby, Balding is a joint-honours graduate from the school of cunt presenters who need to BE the news as much as deliver it. Listening to the indignant rug-muncher bark away for this ‘just’ cause and practically tug herself into a stupor of over-indulgent whiteknighting was enough to consider whether my right fist could ram through the LCD TV screen unscathed.

I remember a few years ago half-watching the Lord Mayor’s parade on TV. Balding, not yet the national cunt-treasure she was destined to become, interviewed some little boy with trademark simpleton zeal and alarmist exclamation. Afterward, going back to Dimblebee in the commentary pod, he made this truly bizarre statement, spoken in all sincerity: “I suspect that little boy never imagined when he woke up today that he would end up getting a chance to talk to Clare Balding.”

I bet he fucking well didn’t, the poor bastard.

A simple and brief cunting again for Clare as she is the embodiment of the abc and vice versa.

Her stupid Ray Mears lacquered hair, Desperate Dan chin, and that boxers neck carries more weight than that the fact that she clearly knows fuck all about any sport (still) outside of the posh horses. Lots of fake enthusiasm and nodding of the head when listening to our washed up athletes makes her a national treasure forever apparently.

Not content with taxpayers money tho.. casts her net to C4 and BT also. The grabbing cunt. 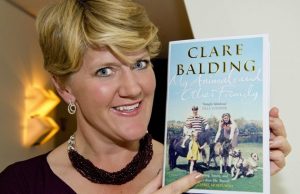 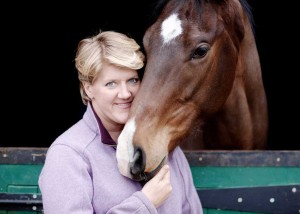 She is another cunt that is heading to be a ‘national treasure’. Best thing about treasure is that it spends all its life buried where no cunt can find it. That should happen to her and her fucking oppo’s.