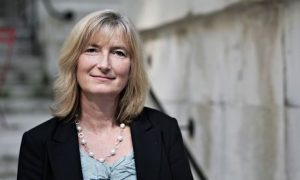 Sarah Wollaston (Tory) deserves a cunting. Having previously been a very vocal Eurosceptic, Wollaston has decided to turn her coat and defect from Leave to Remain. One thing about scum like Major and Heseltine, is that they have at least been honest and consistent about their support for the EU. Possibly the only time they have been honest.

Wollaston, however is a worthless piece of shit who couldn’t even stick with her decision. Word is that Tory whips have pressuring Brexit supporting MP’s to defect, looks like it’s worked with Wollaston. I can’t help but wonder what this non-entity was offered in exchange for becoming a traitor. The chance to suck Cameron’s micro-penis perhaps.

In the grand scheme of things, it isn’t going to Leave very much. Like I said, she’s a non-entity. I just hope the constituents that she lied to about being Eurosceptic remember her treachery at the next election. There’s also a rumour of another defection to Remain in the next few days. Unless it’s one of the “big hitters”, like Gove or BoJo, it won’t really matter.