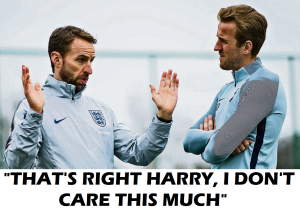 ”England captain Harry Kane says he wants to “shine a light” on issues around Qatar, where the 2022 World Cup will be held.”

”Kane said it was “important” to use the platform the squad had and that he and other senior England players plan to talk to other national team captains “to see if we can be unified in how we approach it”.

How fucking disgusting that this overpaid cunt, who takes the knee to honour a black criminal should talk about ‘a unified approach’

A report in the Guardian last year said 6,500 migrant workers have died in Qatar since the World Cup was awarded 12 years ago. And for migrant workers read modern slaves with no rights. It was also awarded after widespread corruption and bribery.

What about a ‘unified approach’ to stay home you hypocritical, greedy, callous cunts?

Imitation Yank scored a second from close range with this:

The big nosed, under achieving cunt is so full of hot air and piss, it’s not even funny. This morning (March 25), he’s featured in a story on the Sly Sports website. Link here:

So he’s saying that, having qualified for the World Cup in Qatar, he doesn’t see what England boycotting the tournament would achieve. In other words, let’s not take a stand to uphold a principle. That principle being against the widely reported human rights abuses and Qatar’s ‘unfriendly’ attitude towards the alphabet people, amongst others. In other words, let’s ignore all that and just participate anyway on the basis it’s a sporting event and thus apolitical.

Then here he is in 2020 saying England would walk off the pitch if subjected to racist abuse:

So let me get this straight, Gareth. It’s OK to take a stand when your own sun tanned millionaire players are subjected to hurty words. But when poor sun tanned workers building the stadiums your elitist millionaires want to play in are being abused and killed, that’s not worth taking a standing against. What did I miss?

Fucking hypocrite. Him and his cuntish squad don’t give a rat’s arse about what’s happened in Qatar. As long as everything is all shiny, new and wonderful they’ll carry on as if nothing has happened. Boycotting the tournament would make a huge statement. He knows it. We all know it. To borrow a phrase from Orwell, ‘All sun tans are equal, but some sun tans are more equal than others’. An inconvenient truth. #BLSM (Black Lives Sometimes Matter).

And in off the post is Cuntybollocks with this:

Gareth Southgate and his Merry Band of Cunts.

Old Wokegate has said England will not boycott the Qatar World Cup over ‘human rights abuses’ (he can’t bring himself to say ‘slavery’ when dark types do it you see.)

However, it seems he and his players are going to organise some kind of protest during the World Cup itself. It will include highlighting the slavery (go on Bignose, fucking say it!) and the lack of rights for the gays.

I really hope he and his fucking dumb team start telling the Middle Eastern throwbacks to legalise the gayness. A few lectures using a microphone on the pitch and parading rainbow flags. Even better, get a tranny mascot to lead the team out?

We can then watch these stupid halfwits getting rounded up by the religious police just as they take a knee. A quick beating and a five minute kangaroo court judgement of 50 years each in a 50C hellhole prison cell, shared with about 20 smelly cutthroat cunts.

Here’s an idea. Leave them to their beliefs and culture. Just don’t push for the cunts to come over here. It’s fucking simple. It’s none of your fucking business. The world knew these cunts used slavery before the world cup. They knew they had strict religious beliefs which makes the gayness illegal.

It should never have been given to the cunts in the first place, how about that you cunts?

But they’ve got it so you either go and shut the fuck up, or stay at home on principle.

But please, please do tell the mad cunts how they should run their country and how to be ‘more progressive ‘ with their religious beliefs.

I look forward to the results.

I’m pretty sure the cunt players won’t miss the opportunity to make a fortune on sponsorship deals during the tournament though, the fucking hypocrites.

I’m sure the 6,500 dead slaves’ families will be thankful for you holding up a banner for ten seconds, while you cream it in and donate fuck all to them, you fucking shithouses.

Remember, black lives matter…well not these ones though.