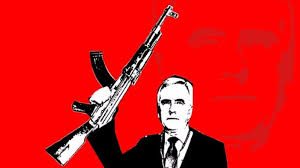 Has that marxist evil fucker John McDonnell been cunted on this site yet ? we all know he’s a sort of Hienrich Himmler to Cuntbyn and just as evil and dangerous, he openly supports the IRA and his peaceful mates in Hamas., until a while ago he used stealth and cunningness to achieve his aims.
But now he is inciting riots to overthrow the Government.
This piece of runny shit MUST be stopped.