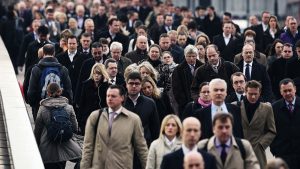 What the fuck happened?
Even as recently as the 90’s life was pretty cool and fun.

Enter cultural Marxism, under the guise of political correctness.
It went like a targeted virus into every corner of life.
The under 30’s now are so brainwashed by it that within 30 years, well, I’m just glad I’ll be on the way out.

It’s been the total assassination of every element of common sense.
The promotion and favouritism by the establishment of any and all minorities.

We can’t say no to illegal immigrants for fear of causing offence.
Gays have more rights under marriage than “normal” people do.
Toddlers being encouraged to ask for a sex change.
The harder you work, the more penalised you get.
The bigger waste of space you are, the more you are offered.
Coppers in line to be recruited with face tattoos and drug convictions.

Everything that was a pinned on bad idea 30 years ago is being touted as the way to go.

The road to ruin is dressed up as the yellow brick road.

The two party system in this country means it makes no difference who you vote for as they are both onboard.
Anyone who suggests an alternative is destroyed by the media and establishment as islamophobia, homophobic, racist, sexist, their life and family are threatened and their life is promptly destroyed.

Brexit was a punch in the guts to this ideology.
Gotta stamp on the cunts head while it’s still on the ground.

Trouble is the only guy with big enough boots was Nigel and I think he succumbed to the threats.

Of course most of my friends just ignore it all and concentrate on their tiny bubble of work and family and let everything crumble on the outside.
That’s what they want you to do though.
Sorry to sound like a conspiracy cunt but I’ve realised that if it’s really happening, then it’s not a conspiracy.

Enough to make you want to move to the outer Hebrides.

Thanks you cunts.
I was enjoying my life.