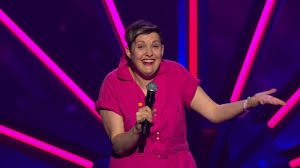 Josie Long is an archetypal cunt symptomatic of everything shite in today`s society.I confess I only knew the bitches name and that she was a comedian but all female comedians of a certain age group all fucking morph into one amalgomous glob of utter shite to me!Anyway I saw on my Facebook timeline a video of her with purple hair looking like she hasn`t slept or washed in days entitled “Are white people doing enough to stop white terrorism”.I honestly did not even need to watch the video as it was so predictable that I could tell she was going to slag off the right defends Muslims gloss over Muslim terrorist attacks invoke Hitler blame “toxic masculinity” and speak in a slow sarcastic mockney voice… and guess what I was absolutely fucking spot on.Apparently Mssss Long is more worried about far right terrorism than Islamic terrorism which is logically insane as hundreds have lost their lives to Islamist terror attacks this year but the so called “far right” is only responsible for one death in this country this year and the victim was Muslim so how you deduce your conclusions must be through the prism of sticking a pair of scissors into your ear hole so far that it digs into your brain! She also said that we tend to equate white terror attacks to lone wolfs…well the guy behind the Finsbry Mosque and Tommy Mair had no known current connections to a wider network of extremists.So what the fuck else do you label them as in that case? Muslim terrorists on the other hand have nearly been part of a wider network.This isn`t a right wing conspiracy :It is fact.She said she felt angry about Finsbury Mosque but sad after the Manchester bombings.Just like Comrade Corbyn (Who she is a massive fan of shockingly) she only shows her disgust and emotion at terror attacks one the person is brown. Long is also going on about how she is newly single.Is it any wonder you were dumped though love?You look like a typical feminist gender studies tumblr retard who smells of b.o and cheap weed and that hasn`t used a comb since she was 6 years old.What pisses me off about her ilk and by that I mean Oxford-educated self-proclaimed comediennes who look like bull dykes/gender studies professors and momentum activists is this: They are so predictable it is spooky.Upon googling this cunt I found an article she did with the evening standard that started “Josie Long explains why she’s making a show about optimism after …” and without even opening it I guessed the next word was Brexit and yes it was.These people are so dense due to society dumbing down and not encouraging independent thought meaning that misfits try and join a counterculture by becoming part of the cultural mainstream of the last 40 years and they don`t even possess the analytical skill of self-awareness and reflection to realize the hilariously retarded contradiction that is their very existence!

I am not going to slag her off as a comedienne because I don`t recall seeing any of her material although I am sure I briefly have at some point watched a segment of her on Live at the Apollo then turned it over after losing the will to live.But typing in Josie Long is a cunt into google lead to a stream of reviews featuring the words Josie Long and Cunt so I think it is safe to say she is probably as funny as pancreatic cancer a slipped disk and alzheimers combined.

In short Josie Long is a cunt who needs to drink a wet glass of cement!