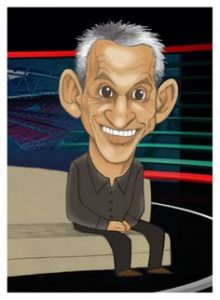 Gary Lineker deserves yet another cunting. Once again, this jug eared fucktard has expressed his disdain for democracy and the will of the majority by announcing his support for the ‘People’s Vote Summer of Action’ to avoid a no deal scenario, which according to Lineker, will have ‘terrible consequences’ for the UK. Also, Lineker reckons that the mess our politicians have made of Brexit is entirely because of us, the people, giving them the ‘problem’ of Brexit, by voting to leave the EU. Damn us pesky plebs.

No, Gary, WE are not responsible for the fuck up that parliament has made of Brexit. THEY are responsible for it. As with all the other EU loving traitors, like you, the vast majority of MP’s have blatantly refused to abide by the democratically expressed will of the majority. It’s been just over two years since the referendum, and we are no closer to leaving that wretched disorganisation than we were the day after the vote. That is entirely down to parliament. They were given clear instructions by the majority to carry out a complete and total withdrawal from the EU. Instead of doing that, they have spent 25 months arguing over what THEY think Brexit should be.

If people disagree with us leaving the EU, I have no problem with that. This is, supposedly, a free country, and they have every right to express their opposition. Cunts like Lineker though, think they also have the right to try to go against the will of the people, they are wrong. In my view, Lineker and all the other Brexit saboteurs are traitors. Plain and simple. And as said before, if they the love the EU so much, they should fuck off to an EU member state and leave those of us who love this country to get on with making it great again.

Gary Lineker, you overpaid, undereducated, jug eared cretin, you are a cunt!

It is hard to imagine that Gary Lineker could out cunt his already colossal cunishness but whether it is his DNA or lack of brain cells dear old Gary has managed to ramp up his cunt level yet again by giving his name to the campaign for another EU referendum. Our deeply philosophical and astute politically mined ex-footballer has declared to the nation ‘Brexit feels like it is “going very wrong indeed’ he quickly followed this rhetoric with the statement
‘I am not a politician but I know when something is going wrong and right now Brexit feels like it is going very wrong indeed.’

Well, you may not be a politician but that has not stopped you acting like a right cunt on all things Political. My advice is just to keep talking shit about football and keep out of the public eye with you inane comments because Gary all you are doing is proving to a nation what a truly mega cunt you are. 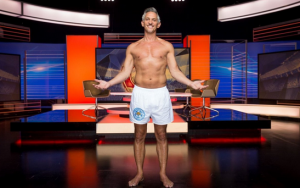 Gary ‘Ol’ Jug Ears’ Lineker deserves another cunting. Yesterday, Leave campaigners carried out a stunt to protest the outrageous stitch up that Theresa the Appeaser performed on our already beleaguered fisherman. A small trawler sailed up the Thames to Parliament, and Nigel Farage dumped a load of fish into the river. Cue Lineker, who took to Twatter and posted a photo of Nige, along with the boat’s skipper, Aaron Brown, each holding a fish over the side of the boat, with the comment; “Rarely have 2 such slimy, smelly, slippery creatures held on to some fish”.

Rarely have 2 such slimey, smelly, slippery creatures held on to some fish. pic.twitter.com/AIJJHd5vjV

People can, and frequently do, say what they want about Nigel. It goes with the territory. He doesn’t care and, frankly, neither do I. But to insult a hard working fisherman who, unlike Lineker, doesn’t scam £1.75 million per year from British TV licence payers, not to mention the obscene amount he gets from Walkers, that’s when you know you’re dealing with a nasty, arrogant, elitist, left wing, fuckwit of a cunt. Personally, I don’t think he’s worth a single penny of the obscene amount the BBC gives him.

It wouldn’t be so bad if this a one off. But it isn’t. Like most of his ilk, Lineker is a fanatical Remainer and has frequently taken to twatter to express his dislike of the 17.5 million people who voted to leave, often resorting to immature insults. And as we all know, Remainers are a bunch of childish cunts, who have spent nearly two years sulking over the referendum and insulting 17.5 million decent, hard working British voters who exercised their democratic right to decide for themselves whether they would to stay or leave, instead of voting the way that traitorous cunts like Lineker wanted us to vote. And it’s not just Brexit, he’s done it with people who have no interest in any of the many leftie causes that he supports, or those who simply disagree with his comments.

I used to like Lineker when he was playing football. Sure, he had a reputation for being a bit of goal hanger, but he seemed to be a pretty decent person. Then he retired and went to work for the BBC, and the REAL Gary Lineker emerged. A nasty, arrogant, opiniated twat. Now, the mask has well and truly slipped. Cunts like Lineker seem to think they’re better than the rest of us. That they’re more intelligent, more intellectual and, therefore superior. They seem to think that democracy is something that only they should have a right to, because the rest of us aren’t intelligent enough to understand complex issues such as the EU, and can’t be trusted to make what they consider to be the correct decision, i.e. to vote to stay in an organisation that steals billions of pounds from us every year, hates us, mocks and insults us regularly, is less democratic than the former Soviet Union and is run by “leaders” who nobody outside the EU parliament voted for and are nothing more than grossly overpaid, incompetent bureaucrats.

Remainers are childish cunts, especially those who are on the left of the political spectrum. Every day they dream up plots to reverse Brexit and hurl insults at 17.5 million people, simple because we exercised our right to decide for ourselves how we would vote in the referendum, rather than simply voting the was THEY wanted us to vote. I hate to break it to them, but that’s how democracy works. One person, one vote. Cunts like Lineker though, seem to think that the concept of democracy should be, “people who don’t share my opinion should not be allowed to vote, because they’re stupid and wrong”. That’s not democracy, that’s totalitarianism.

To my mind, if you’re against us leaving the EU, that’s up to you. Most Remainers, although still unhappy about it, have accepted that we will soon no longer be members of that malicious, insidious cesspit of dictators. Some, like Lineker, are incapable of accepting it, because their arrogance, their sense of superiority and their general disdain of Britain, her people and everything British won’t allow them to accept it. In my opinion, people like that are in the wrong country. They should be in one of the other member countries. So, Gary Lineker, mega cunt, off you fuck!

After yesterday’s Thames protest against the governments continued fuck up over fishing in UK waters, which saw fisherman on behalf of the disgruntled fishing industry throw dead fish into the stretch of the river outside parliament, good old champagne cuntfuck Gary Lineker tweeted the above.

Farage can look after himself but the real cuntitude of Lineker’s tweeting twatcunt fucksploits is the layered attack on hard-working fishermen worried about their continued compromise thanks to our spineless fucking government. Focusing on easy targets like Farage and ignoring the reasons for the protest, Lineker the monumental cunt has thankfully received largely a backlash from many users on the above comments; many astutely pointing out how Lineker’s faux-outrage only ever appears on select socialist causes – nothing from this talking giblet for example on the Telford fucking shocker of a scandal.

I utterly fucking despise crisp-nicking Shitteker; a man in may eyes famous for being a cringe-worthy scrounger on the pitch, for shitting himself during Italia ’90 and for being the voice of liberal entitlement since the advent of social fucking media. The hatred for this bastard even exceeds that of Lily ‘Xenomong’ Allen. Everything about this man – the hypocrisy, the smug chipping in under the false veil of social justice, the greed, the risible gay art student beard – everything connected to him is utterly fucking contemptible.

An arch-cunt of modern times to be sure, Gary Lineker. 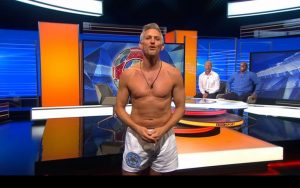 God this cunt can’t miss any opportunity to stroke his gigantic ever increasing ego! This Twittering pontificator from luvvie bubble central will now be presenting the World Cup drawer for Moscow (cunt competition).
“What???!!!” you say! “Not Gary Lineker!? Surely not?!”

Not, Fifa make me feel sick, I’m revolted at the top level corruption, it’s run like a dictatorship Gary Lineker? Surely not?

You mean awful, self parodying in a knowing way, Walkers crisp Gary?
“I’ve got to strip to my underpants “reluctantly” on MotD Gary?
Working for BT whilst being paid by the tv tax Gary?
Smug “National Treasure” a bit like cunt Stephen Fry, Gary?
Loves the sound of his own voice Gary?
Offshore tax Gary?

The same Gary that dumped his wife for a vacuous model and then morphed into an unrecognisable, shiny-faced, trimmed goaty, husk of his former self Gary?
He scored goals for England therefore he must be a good ‘un Gary?
Hypocrite Gary? Him? 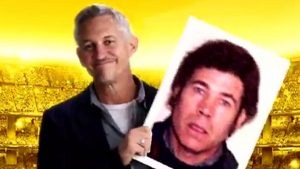 Gary Lineker gets paid around £1.8 million a year by the BBC, that’s a disgrace!
How is he expected to survive on that? He has to take on extra jobs to make ends meet, advertising Walker’s crisps for god’s sake. it’s about time the BBC got their act together and started paying their star presenters what they’re worth, before they’re lured by rival broadcasters. 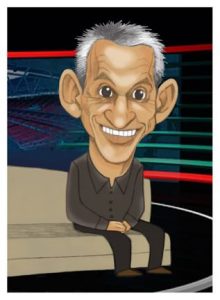 Gary Lineker is a monumental cunt…
He said this about the French Presidential Elections: ‘Huge disappointment, resentment and bitterness amongst some of UK’s fascists this morning. She lost (comfortably). Get over it.’

But when somebody replied to him, ‘So, why can’t you get over Brexit?’ Fanny Lineker responded, ‘Missing such an obvious joke is a blocking offence i’m afraid.’

This snotty cunt can’t even answer a civil question and ‘blocks’ anyone who disagrees with him?… And the smear of shite has the audacity to talk about fascists?!?…. Hope he falls off a fucking big cliff…

I can’t abide that rectum of rectitude, Lineker.

A pious, jug-eared wankspangle sums him up nicely.

His only and modest talent lies with advertising crisps.

No wonder his Mrs ferked off. He was probably up in his private study, spanking himself over the Brexit referendum every night. Leaving her to play solo gusset typing.

Hell will freeze over before another Walker’s crisp passes between my lips. I might write to them and tell them that…..but I will relent if they sack the bastard. Does anyone know where I can buy “fascist” crisps?