A quick and succinct cunting for Grayson Perry.

This exhibitionist, mincing, pointless cunt is in the paper today talking about a TV series and how it made him cry. Well, you dragged up twat, watching anything you are in would make me cry.

What the fuck has happened to us when creatures like this and that other mincing drag queen Izzard get serious attention rather than the ridicule they so richly deserve.
The cunts. With my righteous anger toward our dipshit political class, I almost forgot to nominate my intended target. Grayson Perry.

Yes, that’s right. The far left ‘artist’, who likes to dress up in ridiculous female type clothing, because he apparently thinks it’s as far away from masculinity as it’s possible to get. No, I don’t understand it either. Then again, I’ve found that it’s often impossible to find any logic in the actions, thoughts, and comments of those on the far left.

I’m nominating Perry, because a couple of days ago, he criticised Bear Grylls as a bad role model for young men and boys. Even calling him a “hangover”. Apparently, Bear doesn’t teach our male youth to be open with their emotions, or to explore femininity. According to Grayson, and this is not a direct quote, Grylls is all about teaching men…to be men. Yep, Perry has taken issue with Bear Grylls, because he’s macho and encourages males to do what males have done for several thousand years.

It turns out that Perry has a three part TV series on Channel 4coming out soon. Now this is a direct quote;
‘The show is about what it means to be a man, and major issues like 90 per cent of crime is done by men, that men tend to dominate business and men commit suicide six times more than women“.
Asked why he thought those problems existed, he said: ‘Because millennia of conditioning has brought men and boys up and taught them certain behaviours that aren’t helpful any more, such as suppressing your emotions, status-seeking, answering problems with anger and violence.’

This is someone who dresses in clothing so ridiculous, that NO self respecting woman would EVER wear. Not even in private. This is someone who, in his own words, once dressed as Little Bo Peep, “because of a yearning for femininity”. Now I have no problem with him doing that. If he wants to dress and look like a complete TWAT, that’s his business. But what the fuck does someone who probably spent his childhood summers running around in his mother’s knickers know about being a man? He’s spent most of his life running away from being a man. And to be fair, he’s actually succeeded.

Bear Grylls is an ocean going bell end. But I would rather have him as a role model than some limp wristed, patronising, cross dressing, tasteless, unhinged gimp, who wants to emasculate those of us who actually are men. I’m not saying that we should be encouraging each other to act like cavemen. That’s what those violent cretins who attach themselves to football clubs, and give real fans a bad name do. But for Christ’s sake, we live in an age where dipshit feminist led advertising agencies think it’s acceptable to produce adverts that portray all men as morons. We don’t need an emasculated foreskin like Perry sticking his fucking oar in too. Leave us the fuck alone.

He can wear as many ridiculous dresses, and as much crappy make up, and be as camp and effeminate as he wants. However, he has NO fucking right to slag of a man who prats about in the woods, being macho and doing what men have done for millennia.

Channel four should also be cunted by proxy for being a continuous platform for all this kind of shit. Widow Twankey can take his opinions, his piss poor attempts at art and his wardrobe that even Camilla Batmanpigfucker wouldn’t wear and shove them all up his worn out arsehole.

Grayson Perry looks a right cunt, If he wants to be a girl then fine be a girl but don’t fucking try and influence others. What a cunt. 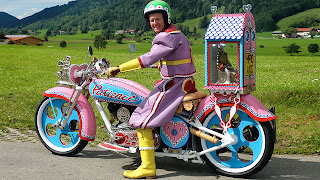 What a total cunt. 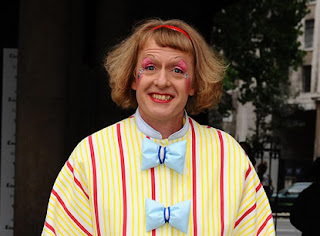