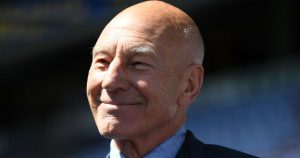 A lights round the make-up duckie cunting please for this up-his-own-arse luvvie, who apparently was fighting for fucking Labour when he was all of 5 years old (against Sir Winston Churchill if you don’t mind!)

He is a true Remainer, duckie, and it is Corbyn’s stance on this that has really upset the queen of the silver screen. That and the fact that Corbyn was (mildly?) “rude” to him, but read it and see just what that rudeness was. If I had been rude to him I would have told him to get his fucking head out of his decrepit stinking arsehole. Why do actors like this old cunt think they are important? 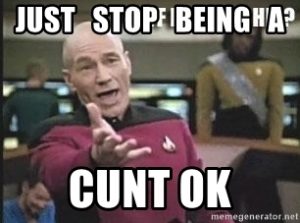 Patrick Stewart is a bit of a cunt, isn’t he?

This griping turd with his permanent bell-end head has been stirring up support to attack democracy and have a second referendum.

Despite living in Brooklyn, this opinionated prick wants to lecture British people about how wrong they were to vote for independence. This puts him in the same boat as Connery, Branson, Rod Fucking Steward and every other shit-eating, gold-toothed rat who emigrates but still wants to spout their condescending vomit to the ill-educated, little people back home.

Stewart recently married his girlfriend who’s 38 years younger than him. I’m sure, I’m absolutely sure, nay absolutely positive she married him because of his dazzling, wit, his shining patriotism and his dazzling, shiny bell-end head.

Fuck off Stewart, you lecherous, hypocritical one-trick pony. You’ve made a career out of your cantankerous, threadbare talent and you’re now letting it infest your politics. You’re 77 years old. The Grim Reaper isn’t too far away and if death is near I’d say, “Make it so.”

I never had much time for this smug bald bastard, but I especially disliked him after seeing that cringefest a few years back where he and that fat unfunny fuck James Corden made complete and utter cunts of themselves arguing like little bitches at some two bit award ceremony.

Now here he is, proudly showing off his complete and utter contempt for us plebs, and not giving one single fuck in the process. Especially made me laugh where he claimed Brexit was “fed by disinformation, untruths and outright lies,” as opposed to all other elections eh?

Went on to further demonstrate his complete detachment from reality by describing remainers as “having at heart the needs of everyone, not just an elitist few.” This coming from a group of people that flat out refuse to accept a democratically elected result. Patrick Stewart needs a cunting. Whilst in Berlin to promote the new Wolverine movie, this pathetic, left wing cunt trumpet had the nerve to apologise on behalf of the British people for Brexit. Apparently, he’s ashamed to be British now that we’re leaving the EU. Well fuck off to L.A. then, you whingeing, baldy cunt.

I’m fucking sick of multi-millionaires assuming they have the right to speak for the whole of the British people on issues that only traitorous left wingers give even half a fuck about. And Mongy Allen has been in the news again, believing the bullshit from the failing Deutsche Bank, and celebrating the fall in the pound. Seriously, a bank that is struggling after paying billions in fines because of dodgy business practices, is really not a bank you want to be taking financial advice from.

Anyway, back to Stewart. He can go fuck himself with a pinless hand grenade. Fucking left wing dick head. 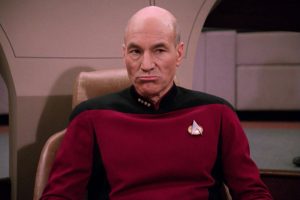 It is high time that that fucking ignoramus actor luvvie cunt Patrick Stewart was cunted again.

He has always been on the radar of cunts but he has overstepped the mark with his latest ‘comedy’ video in which he claims ( this is the serious part) that it was the European convention on Human rights which gave us in the UK , the right to a fair trial, protection from torture and the criminalising of domestic violence amongst other things. FFS !!!! This is the latest in the brainwashing of the populace to have them think that none of these things existed before ECHR.

A similar strategy is underway with the EU. The EU won peace in Europe don’t you know. Fucking cunts and useful idiots like Stewart are at the heart of this fucking nonsense.