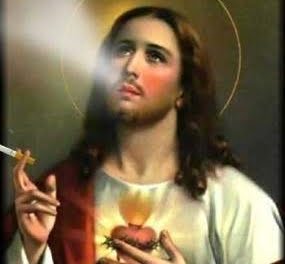 Jesus will never come back here to sort shit out. Think of it from his point of view:

“Yo dad! I ain’t going back there, no fucking way man! They’re still carrying those fucking cross things around just on the off chance I do turn up and they’re ready to string me up again dude! No way! Anyway I was having a chat with Mohammed next door and they’re busting to the rafters with these virgins. Everyone of them male, between 18 and 24, all gunshot victims, totally sad dude! Hey when a new one arrives you can hear the rest say “Doh! Another man!”, yeah like fucking “Doh!” man like that Homer Simpson dude! Anyway he was wondering if we can take a few of them off his hands cos…….er….no, he’s already had a word with Satan but he doesn’t want the cunts either man!” All God-Botherers are cunts.

Allow me to paint a picture of a typical God-Botherer, fellow cunters:

“I’m a sad, social inadequate who has never got over discovering that Father Christmas and the Tooth Fairy don’t exist. Rather than taking responsibility for my own actions in an immoral universe, or at least trying to create some meaning in my life, I need a fully worked out belief system given to me in easy to digest mental yoghurt servings. Fortunately, I have discovered that there is a magical sky daddy (WHO JUST LOVES ME SOOOOOO MUCH) who will take all that pesky thinking out of my life. I just have to give money to the daddy pushers (sorry, priests) and follow the rules he allegedly gave out in various books of fairy stories dating back to the Bronze Age. And the best things about the sky daddy? He hates all those nasty, confusing things I hate – books, ideas, the followers of other sky daddies who just don’t exist. How do I know other sky daddies don’t exist? Mine told me so.”

It gets on my fucking tits the “respect” we are supposed to give to religious fucktards. The malign influence has even spread into politics in the UK; after years of sneering at the mad antics across the Atlantic, UK politicians are now keen to show themselves as “people of faith.” FUCK OFF WITH THAT SHIT. If anything, religion should exclude anyone from holding a position that involves more responsibility than a lollipop lady.

Religion has always been about money and about telling other people what to do. It has got fuck all to do with God. Leave God out of religion! He’s up there in heaven, quietly not existing. He’d be horrified if he knew what was done in his name, but I suppose non-existence is even more blissful than the ignorance of most of his followers.

Judaism is typical Bronze Age garbage that a semi-literate and barely-civilised tribe uses to justify its violence towards outsiders. Basically, the Old Testament says “our god is a double-hard bastard who can kick your god in the nuts so fucking give us your birds and your dough.” And when things aren’t going so well? We need to be even more cuntish in our crazy devotion to our tribal deity. If there had been airplanes in the first century, you can imagine some crazy Jewish cunt piloting one right up the Roman Emperor’s forum (yes, this is an ass joke).

Eventually, some Jews got fed up being bosses of some desert shithole in the middle of nowhere and wanted to expand their horizons. So they picked up a commonplace idea from the civilised Greeks around them – the idea of the resurrected godman. So successful was this fusion of Jewish self-belief with Greek storytelling that, allied with ludicrous amounts of childish wishful thinking, Christianity became the top form of godbothering, ever.

But, for sheer craziness and fanatical devotion to insane ideas, the followers of the mindless cult of Islam take the biscuit. Millions of pages have been written on the nature of morality but Muslims believe that an illiterate, epileptic paedophile whose main contribution to theological thought was “Allah says I can fuck who I like, even if she’s my daughter in law or nine years old” is the perfect man and the last prophet. Twats. Jesus Christ – the cause of more wars and suffering than any other person ever born, so let’s celebrate his birth!

( Happy Christmas to all our readers! Ed. ) I would like to nominate the baby Jesus. Okay, had a tough start in life. Born in a stable, but at least the cunt got some gold. Thirty years later the ‘exalted one’ is working as a fucking tekton. What happened to all the fucking gelt?

And what the fuck happened to Joesph? I bet the cunt fucked off with the fucking money. Cunting Yid – should have been nailed to a piece of wood.

Has anyone noticed that baby Jesus looks a bit like Prince George? God bless you Maaaaaaam.