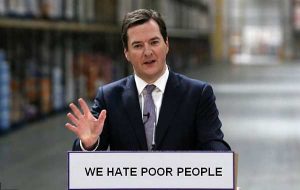 A jack of all trades, master of none cunting please for that slimy egregious ex-politician, and EU arse-wiper, (and part-time “editor” of London’s evening newspaper , The Standard, among his other half dozen jobs), Gideon Call-me-George Osborne, who gave one of the most oleaginous self-indulgent interviews of his fifth rate career on Radio 4’s Today programme this morning (Dec 22nd), considered so important by the Tony Hall/James Purnell BBC that the interview was conducted yesterday (lots of time to edit out anything embarrassing) by none other than David Dimbleby. Why not let John Humphries get at him – live?.

I can’t willingly listen to it again but it is available on the BBC Listen Again thing-ma-bob for 29 further days. It starts at 8.08 after the news.

Essentially it was all about Osborne’s view on Brexit, but the most sour of sour grapes were reserved for his resentment that he got sacked from the cabinet. Everything the man writes in his comic or comes out of his mouth as bile amounts to his anger that his miniscule “talent” wasn’t recognised.

I am sure there is a job for him somewhere – perhaps with Dad’s paint and wallpaper company. I am sure a friendly decorator would take him on as his boy (and if he wouldn’t I am sure Mangledbum would turn the other cheek).

What a pampered , preening motherfucker the little shit is.

Me again – I’d like to Cunt George Osborne and the twats who write for the ghastly Evening Standard. It is a loathsome rag which can’t afford to charge anybody because no-one would bother buying it. It is infested with cuntish journos who ooze with sanctimonious self-righteousness, outwardly taunting readers who don’t happen to share their right-on, luv-a-freak, let-it-all hangout, Euro/Hackney/Camden Corbyn-loving bollox. In the dock on multiple trial stand Sam Leith, Richard Godwin, Rosamund Urwin, Nick Clegg and Matthew of Ancona. Twats the lot of them.

I feel sorry for George Osborne. No really I do! It must be terribly hard holding down all those highly paid jobs and finding the time to slag off Theresa May!

No, George just wants to behave like a spoilt petulant brat unable to accept that losing his job was pretty much all down to himself fucking up big time and that the austerity everyone voted against was the austerity he introduced as Chancellor.

Easier to turn on the very party you helped to lead and bitch on about the woman who sacked you than to admit that you’re a 100% 24 carat solid gold fuck up, eh George?..

The alleged coke using, useless cunt is quitting as MP for Tatton, he is no doubt really busy ‘earning’ his pay as editor of the Evening Standard (No doubt he’ll get a bonus for all the promoting of the Cuntservatives we will now get). He also gets an ‘allowance’ from his family business.

What a fucking cunt.

Don’t forget his other day job….literally a day job, one day per week working for Blackrock. £650 grand a year or £13,500 a day. Ka-ching, jackpot, bingo! I’m sure he will be toasting us all with a few bottles of Cristal.

His favourite mantra was  ‘We are all in this together’…oh yeh, don’t WE all wish we were rolling in ‘this’ together with him.

Politicians in general,  can’t get enough of ‘this’ and ‘that’  Be it filthy lucre; hoes and blow; brown envelopes; rent boys; pussy…….

Yes little Gideon is a very busy boy. His workload may explain why he had not held a constituency surgery for nearly 2 fucking years and why he had only participated in a third of the votes in Parliament since Treezer kicked his greedy arse out of Number 11. Fuck me it’s a hard life being a politician  (soon to be ex-politician!)

Nominated by Freddie The Frog. 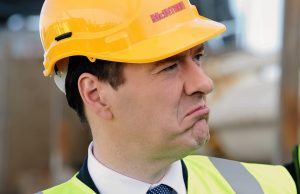 Gideon Osborne is a patronising cunt.

Saying now that he wants the closest possible relationship with the EU post Brexit. He claims that Theresa May should remember that Britain did not vote for a “hard Brexit”. How the fuck does he know the motivation of the electorate when he misjudged us as idiots who would blindly believe his propaganda of financial armageddon which has proved to be complete bollocks.

I really wish TM would release a statement saying that if she gave a toss what Gideon thought she wouldn’t have sacked him. This cunt talked down the economy so much during the referendum that when the vote came in the economy took a temporary nosedive.

Osborne should apply to be a PA to the snarling arrogant cunt Schultz. He would enjoy being his bitch. Say what you like about Cameron at least he had the decency to quit!

I now hear he’s biding his time until Brexit gets all fucked up and he can challenge May for the leadership. The little shit actually believes he can still be PM and that people will actually vote for him.