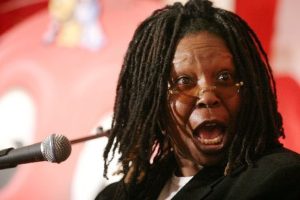 Yes, this immensely talented and versatile actress has brought her considerable intellect to bear on the slave trade. A few hundred years ago.

Leaving aside the fact that, but for the slave trade:
a) She would be wallowing in an African shithole in poverty and probably dead by now.
b) It was her ancestors that supplied the slaves in the first place.
c) Slavery still exists in the land of her forebears.

What fucking difference does an apology make other than to inflate this stupid cunt’s ego and self importance?

And where the fuck did she get a Jewish name from?

She should stick to shite films and whatever the fuck her talk show does instead of trying to out virtue the appalling Oprah Winfrey. 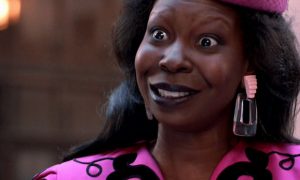 Whoopi Goldberg is a cunt…

Apart from being an untalented in your face exhibitionist cunt, Goldberg is yet another hypocritical cunt who claims to care about women who have suffered harassment or abuse, yet she is another Hollyweird cunt who has her tongue firmly place up a n@nce’s arse…

How can this fucker have the nerve to speak at a women’s march, but say Roman Polanski didn’t commit rape on a child and defend him to the hilt?!! Polanski was/is guilty as fuck and the whole world knows it… I know wimmin are liars and change things to suit themselves, but this is taking the piss… A lover of p@edo Polanski speaking at a march against sexual assault?! Why don’t they just book Maxine Carr for the next one and have done with it? What a joke and what a fucking cunt Whoopi is… Fuck off, Momma! 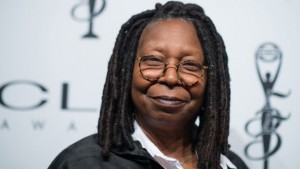 Whoopi Goldberg is a supercunt… A supercunt who sticks up for that nonce cunt, Roman Polanski…

Racial stereotypes, eh? Well, it was OK for Goldberg to play the stereotypical sassy black mama character in Jumping Jack Flash and Ghost…. It blew her fat arse far enough up the Hollywood ladder.. the female Uncle (Auntie?) Tom cunt… 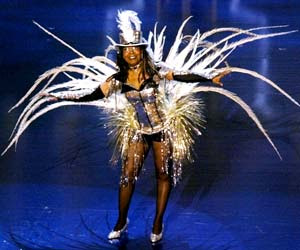 Whoopi Goldberg is a “what the fuck is the big deal about her anyway” cunt.