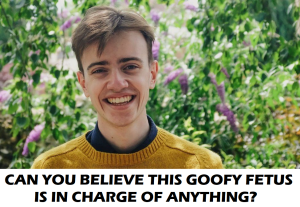 This is the story

I was itching to cunt Andrew Graham-Dixon. Yes old Andy Dixon. Or more probably Graham Dixon. He’s such a pleased with himself media art buff liberal chancer.
I am pretty sure his perspective on history is acceptable because he has been retained by the BBC for ages.
He’s one of those historians that in a sense modernises history. Which is exactly what you shouldn’t do. Yes one programme about Caravaggio I remember. Caravaggio led a colourful life certainly. Everyone knows that. But his programme was all about his colourful life and nothing else. Noting about the skill in which he coloured a canvas. Or the positioning of figures or perspective or drama or anything like that.

He refers to himself as an ‘art historian’. So you would think there’d be a bit about art.

And even with all the biographical stuff he doesn’t really bring the period back because all his points are made with reference to the modern day.

I have tried to find his impression of Hitler on Youtube but no luck. I would love to see it.
(Well find it you did Miles, well done. Here’s the link. – NA)

But its not him really Its the utter bullshit of the moderator or whatever he is called at the Cambridge Union. From the kink-

‘Blacklisted by the Cambridge Union

An art historian has been banned from speaking at a Cambridge University debating society after offending students with a Hitler impersonation.

Mr Graham-Dixon said he was trying to “underline the utterly evil nature of Hitler” but apologised for offending.

Mr Bradwell, who joked about the speech directly afterwards, has since apologised to members.

While presiding over the debate, he said he was “quite drunk”.

Afterwards he said he had had two glasses of wine with dinner beforehand but was “not impeded in my ability to chair the debate”.

However, he said it was “inexcusable” that he had not halted the parody.

So he’s a little bit drunk but enjoyed the debate but thought again. Maybe the next morning (with a headache) remembering the previous evening and Hitler mentioned and fuck me I’ll get cancelled if I don’t do something quick. Get the word out ‘blacklisted’.

I wrote in another Nom how offensive I find the word ‘cancelled’. I have found an even worse word they are using now ‘blacklisted’.

Havent any of these elite Cambridge students read ‘The Crucible’?

I mean Bradwell apologies for not ‘halting the parody’, then blacklists Dixon. Isn’t there just something sio shit about that? I suspect he’s laughing away at the Hitler impression.

I am suddeny having sympathetic feelings towards the historian.

There is an hysteria in the country at the moment with all these cancellations and de-platformings and now blacklists. I would point to a similiar period in the past – the McCarthy witch hunts if I was an historian.