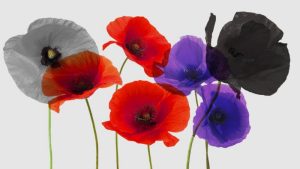 I’d like to nominate – on Remembrance Sunday – this steaming pile of woke brainwashing bullshit aimed at the kiddies published on the Newsround section of Al Beeb today.

Paraphrasing slightly, but it boils down to: Did you know, kiddies, that you can commemorate those fallen in war with poppies in colours other than red?

(quote – “Some people feel that the red poppy glorifies war and conflict …. What poppy do you wear? Or do you choose not to wear a poppy? Let us know in the comments below”)

Inevitably, there is a black poppy which “commemorates the contributions of black, African and Caribbean communities to the war effort – as servicemen and servicewomen, and as civilians … [it] aims to highlight “largely untold historical legacies” from the 16th century onwards.” Of fcking course.

There’s a purple poppy – “worn to remember animals that have been victims of war”.

And finally, the white poppy, which “commemorates people who died in conflict, but focuses on achieving peace and challenging the way we look at war”.

FFS, is nothing sacred?! Are none of our traditions safe from being pawed over by woke idiots intent on razing our heritage, culture and character to the ground?!! This is simply a Nation wanting to commemorate its war dead for dog’s sake.

It’s only a matter of time before we get a rainbow poppy to recognise the efforts of that huge consort of gay servicemen. Wear your Pride Poppy with Pride. And a Tranny poppy – probably made from frilly polyester knickers.

I remember being taught at school that the red of the poppy symbolised the blood shed by men on fields in WW1. The point being that all humans (and animals) bleed red blood so there is zero need for all the above divisive bollocks. The final irony is that those fellas died for something better than this.

Rant over, time for a vino.