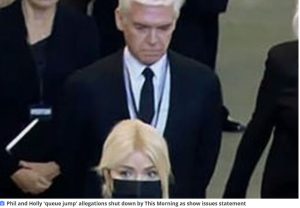 A Royal and Emergency CUNTING for Philip Schofield and Holly Willoughby and other que jumping dignitaries (mainly MP vermin):

Not only do these woke scumbags infest our TV sets spouting their Left wing bile, they now take the piss out of the general public and decent celebrities like David Beckham who waited their turn (some up to 13 hours) to pay respects to Her Majesty the Queen by queue jumping.

These fucking pricks think they’re above everyone else and think the rules don’t apply to them, not just in terms of queuing etiquette but with rules and regulations us mere mortals have to adhere to in general.

May monkey pox and vaginàl warts strike down sleezy back door merchant Schofield and his fag-hag slag Willoughby for being utter disrespectful cunts in a time of national mourning.

And here’s another, this time from Fuglyucker

Phillip fucking Scofield is a treble cunt, there are lots of reasons this chutney ferret is a cunt, it seems every add for releaving people of their cars for next to fuck all, pet insurance seems to be this cunt, I am so sick of seeing his stupid voice, mincing voice, I am sick of the cunt.

And here’s one from Jeezum Priest focusing on Graham Norton

I see Graham Norton has thrown his hat into the ring regarding Schofield and Willoughby.

Why?
Has he a new book coming out?
Maybe someone’s been daft enough to make a new quiz show ( just what we need) with him as host?
Why on earth he thinks his opinion is more valid or relevant than yours or mine, about this non issue, I really don’t know.
Fucks sake, let it die a death, already.
I’m fed up of reading about it.