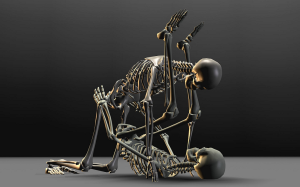 …or more precisely the bunch of woke cunts who have decided that skeletal remains should no longer be classified as male or female, black or white.

Apparently this is because scientists cannot ascertain how they self identified whilst they were alive. Well, I’m pretty sure that in ancient times men were men and women were women because in those days to portray yourself as otherwise would have lead to quick reassignment to ‘dead’ at the point of a sword.

But that aside, it’s also racist because categorizing the remains by race ‘contributes to white supremacy’

Clearly this is nonsense. Even Professor Jeremy Black says so (see link). I have encountered him at close quarters on more than one occasion and IMHO have found to be, shall we say, a bit of a dickhead to put it mildly. So if you can’t even convince a bloke like him, it must be crap.

Is there no end to this woke nonsense? Apparently not…