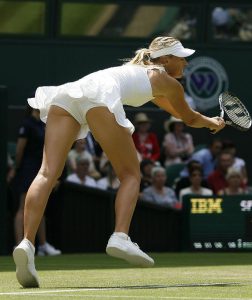 (The only good thing about Wimbledon: now banned! – Day Admin)

2. The tennis players
A bunch of sulky, whining, self absorbed, ego-centric, over-paid cunts

3. The crowd
People with too much money, or no sense. Then there’s the typical Millwall fan who’s gone for a day out, screaming at the top of their lungs “come on Andy!”. Not to mention the cunts who start clapping slowly because Zuga Fishbreath, the no 273 seed from Albania has the audacity to query a line call – and the fucking sheep like crowd that have to start clapping too.

5. Sue Barker
The grinning red faced midget has been on a nice little earner for the last 30 years. Calls all the ‘stars’ by their 1st names (like they’re on speed dial!), gushes over the former winners. Never won a twix wrapper herself.

Now all the ‘A’ list cunts are fawning false compliments “you’re last Wimbledon Sue – say it ain’t so” ….Personally I’ll miss the vile hag like a hole in the head !

And there’ more. This time from The Archbishop of Cunterbury

I absolutely despise everything about that utter sack of sick that is Wimbledon. I’ve watched it a bit in the past which has allowed me to build up a good level of reasoned hatred for it. Here is a brief list of my issues with it:

–Fawning gasping crowd when a rally is going on. Absolutely pathetic the way they try and out yelp each other.

–The main referee gets a medal presented at the end of the tournament. He accepts it with the solemnity of a soldier receiving the Victoria cross

–Mixed doubles. Totally abject event for people not good enough to play individual tennis. (Will there be a trans-mixed-doubles? Day Admin)

–Smiley Sue making competitors say that Wimbledon is the best tournament. Even if they are from say France, in which case French open would be more important to them

-The line judges who yell “fault” when the ball lands 2ft outside the line. Then pause and do a dramatic arm extension. Wankshafts

–Posh twat commentators who’s idea of commentary is saying nothing for an entire rally, then chuffing “too good” when someone hits a winner.

-The fact that they don’t play on the middle Sunday. They couldn’t give a shit about attracting a new audience. They hate poor people.

The only good things about tennis are Boris Becker (the German sausage hider and tax dodger), and that other bloke who gets upset and calls the umpire a cheat. I hope he wins it.

And our Norm isn’t too much of a fan either…

OK, not all of them.

Most people inside Centre Court obey the rules and are respectful. But now there is always (and I mean always) some cunt who shouts something like ‘Come on, Rafa!’ in an ear splitting Harry Enfield ‘Loadsamoney’ style voice when Nadal and others are about to serve.

These same cunts have also started football type chants and clapping and the Umpire has to tell these retarded oafs to shut the fuck up.

What is it about cunts like that? They are as bad as the bellends who go to sporting events in ridiculous costumes. If I had paid top dollar for Centre Court tickets and some cunt kept bellowing next to me, I would fill his fucking face in with a knuckle butty.😒

Still, I have enjoyed it this year. I hope that dour cunt Murray loses, Serena and her ‘atitood’ also fuck off, and I must stop having rude and dastardly thoughts about Katie Boulter.

The link is Nick Kyrgios complaining about these backward riff raff:

I hate fucking tennis. I also hate the BBC. But most of all I hate Wimbledon.

Ooh look there’s Prince Chinless and his lovely wife the Cuntess of Braincell.

Perhaps Cliff will sing one of his greatest hits. Strawberries only £19 each. This is the place to be seen. Just like Arscot. Cant wait for Henley and Twickers.

Yesterday teatime I turned on the telly. Wimblefuckingdon on 1. Same on 2. No bother, I will look at BBC News channel. Yep, fucking Wimbledon. (I don’t see much criticism of “white privilege” at Wimbledong by the usual suspects – Day Admin)

Nothing shows the BBC’s London poncy bias more than Wimbledon. Why don’t they show the French fucker on 3 channels at once? Could it be that the French fucker is actually about the sport and not the snobby arselickers of SW whatever it is?

(A quick note. We have a nom regarding the fragrant Emma Raducanu due to go live soon. Therefore please focus on Wimbledon generally for this nom. Cheers – Day Admin)