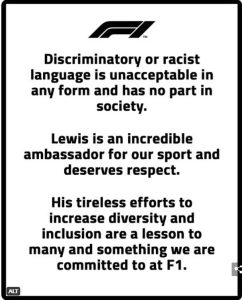 A cunting for the F1 road show and poor little Lewis.

He is having a bad (ish) year so everyone needs to rally round to give him some love. His car his only third best on the grid which means he hasn’t won a race this year.
A podcast by Nelson Piquet describing the incident last year where Hamilton pushed Verstappen off the track and ended his race has caused a shit storm (well a hurty word shit storm).
Piquet used the word neguinho which is a Brazilian slang word, roughly translated a n*gga but apparently it call apply equally to white or black (I have no idea, just looked it up on the urban dictionary)

To make things worse Piquets daughter is shagging Max Verstappen and she has committed to ultimate crime, yes she ‘liked’ a comment from a relative who defended Nelson Piquet.

This is all at the same time as the Rochdale P*ki groomer cannot be expelled from the UK to his native land and some Islamic cunt thought that shooting Gays in Olso was good sport.

Let’s get a fucking grip here, using the n word might be offensive and only when spoken by whitey but it ain’t the end of the fucking world.

And another, this time from CuntyMort

A formula one cunting please for Lewis fucking Hamilton cunt.

Why don’t you fuck off to Monte Carlo and count your millions? Give the rest of us a break from your woke bullshit. I have no time for your fucking wittering. Fuck of and die you cunt.

And then there’s this from Everyonesacunt

“ I would take a bullet for Putin “ says he. Well go on then you out of touch with reality old fucking Cunt don’t let me stop you.

In fact go get me a gun Putin and yourself into a room and I’ll arrange a marksman to get both of you cunts with one shot.

Listen Cunt whatever your political stand point you don’t kill tens of thousands of civilians your own soldiers and the other countries soldiers by the thousands just because you want a bit more land.

Listen Bernie you are a massive Cunt. Nearly as big as Putin the murderer.

And more….. this time from Chuff Chugger

Yeah, yeah It’s Lewis Hamilton…..again, but he can’t help himself!

Where do I start with this cunt of cunts?

Not content with trying to press gang current Formula 1 into ‘his way of thinking’ He is now trying to silence the previous generation of F1 protagonists- actually ANYONE who he doesn’t fits his agenda.

I like Piquet…..a mans man who didn’t bullshit, and spoke his mind. Hell, he even told his team mate Mansell, that he had an ugly wife! Mind you ‘our Nige did pin him up against the wall and smacked him on the nose afterwards.

…a very worrying suggestion from our resident cunt-in-chief Mr Hamilton.