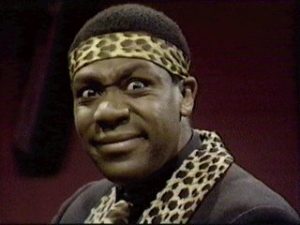 Looks like someone has taken the lid of Sir Lenny (I hate whitey) Henry’s coffin. The cunt now says festivals are not black enough. I am always amazed that no one insights racism more than a person who talks about others being racist.

Lenny, you have had a lucky career, about as funny as genital warts, but you plays the race card at every opportunity and it’s fucking boring you cunt.

I go to a few festivals and have been to many in the past, and those who want to go can go. If black folk don’t want to go it’s their choice. I don’t hear you cunting on about the lack of white folk at Afro Caribbean Festivals though Len.

Let’s be honest you cunt, most of you fame was playing what most now consider racial stereotypes……………are you going to apologise…………….oh and didn’t you make a film where you played a white bloke………….but that alright in your fucked up world

Below taken from some conversation he had with Clive Myrie:–
.
”Sir Lenny Henry described the lack of Black people at Glastonbury ‘interesting’

”The actor and comedian, 63, also said he was ‘surprised’ by the lack of diverse faces at festivals in the UK generally.”

‘I’m always surprised by the lack of Black and brown faces at festivals. I think, “Wow, that’s still very much a dominant culture thing”.’

‘It’s great to have David Olusoga on television talking about black British history that goes back to Hadrian’s Wall,’

I dont mind Myrie, he seems a decent sort and a good journalist. Olusuga is a cunt with a chip on his shoulder who grasps at the tiniest evidence to show that Britain was built by kaffirs and that we are racists for not acknowledging this ‘fact’

Henry whose prominence owes everything to his colour and nothing to his talent is desperately trying to play the race card where there isnt one.
Nofucker stops blacks going to festivals. And his talk of Myrie on Mastermind hiints at affirmative action by the BBC (as in Henry’s case) rather than Myrie’s merit.

Lenny Henry. A talent free cunt with a short memory.

Katanga anyone? Whiting up anyone? Stereotyping blacks in his ‘comedy’ anyone.

And another one, this time from Cuntamus Prime

Glastonbury is coming up so i’ve decided to cunt it especially in light of Sir Lenworth of Henry’s comments on diversity.

I’m sorry chum but it doesn’t matter how many Jay-Z, Storm-Z and hungry hungry Lizzo (Z’s = buckets of chiggun ) acts you see promoted it’s a festival for the Cressidas and variations of Edward who want to see the doyen of this sort of soft faggut music, Ed Sheeran weeping on stage while he sings about the Joker nd the Queen. It’s about the middle-aged Tobiases with their man buns and non-binary toddlers who want to dance to George Ezra. It’s about witless Lily Allen and William Eilish fans. It costs nearly £300 to watch absolute dogshit in a field.
Indie Crap
folksy crap
Aged rocker crap
Token crap.

Black people are better off out of it. No such thing as ‘da streets’ at Glasto. Any black people there will instantly became ‘magical negroes’ to the soft liberal white folksy freaks… types

They’ll all be waving Ukrainian flags this year as well. Is there a more blonde blue-eyed nation on Earth?

More importantly, do the brethren want to be patronised by oily Blair-faced Oasis fans and selected wreckage from along the M4 corridor?

Emily Eavis needs to stand down and let Lord Fiddler take over, or just leave it to cows and sheep. it’s a corpse and as rock and roll as a property portfolio.