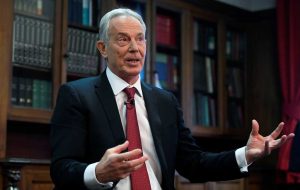 Like that one fart that is thick enough to cut with scissors, the one that simply will not dissipate on the air, it drifts back again demanding our loathing and disgust.

Yes, Anthony Charles Lynton Blah (Knight Commander of the Importuning Arrest) has bobbed to the surface of the slurry pit that comprises our public life like a decomposing turd, bloated with the gasses of it’s own rot.

And what wisdom does the cuntiest of all the cunts have to bestow on his lessers? Apparently, seventy-percent of our spawn should be sent to university. The residual thirty-percent or so can do absolutely everything else; what could possibly go wrong?

Just picture that one if you can. Seventy percent of the national youth armed with pieces of paper that once upon a time would have set them on course to Fat City, but now wouldn’t even serve as bog-wad.

Imagine their frustration and resentment when they’re flipping burgers despite being up to their tits in debt to obtain their BA in Lesbian Interpretive Dance, or their PhD on M’Bubabongo’s Basket weaving in Togo (Innit).

Blair did more damage to the UK University system than the Luftwaffe and it seems he’s not done yet. Skills? Practical abilities? Oh, fuck that shit, who needs those when you can run a country on fairy dust and good wishes.

Nominated by: International Cunt of Mystery

And there’s this from Cunt Me In

Tony Blair
In case you didn’t know, today marks the 25th anniversary of the election of THE worst Prime Minister we’ve ever had. I really mean THE worst and I challenge anyone to show me a British PM or Monarch who did any worse.

Now where do I begin? Almost every problem facing our country today stems from the his Government.
– breakdown of social cohesion as a result of uncontrolled immigration – Blair
– creation of precariat graduate class of 50% of young people with worthless degrees expecting graduate wages – Blair
– long tail debt from taxpayer to private sector for white elephant PPP programmes that often don’t even work – Blair
– failure to repurpose the education system to cope with a new digital economy – Blair
– failure to stand up to federalists in the EU, leading to increased demands for more sovereignty in the country – Blair
– separatism in regions caused by increasing separation of legislation, culture and politics ; the direct result of devolution – Blair
– reduction in the quality of political discourse from proper debate down to soundbite vs gotcha moments + triumph of style over substance – Blair

These are all things he did as PM without mentioning his later grift and frankly despicable post politics career. He really is the absolute worst.

As with Barack Obama or Joe Biden, one asks oneself, ‘If this man had been hired to ruin his country, or was secretly a thorough-going Satanist, what would he have done differently?’