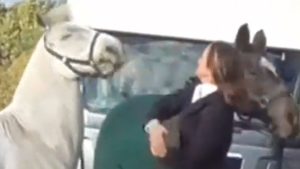 Here’s one for the pot, a hunting cunting for the blood thirsty, short fused, hot headed cunt that is Sarah Mould [ i bet mouldy in the crotch area after a good day out slaying innocent wild creatures from the safety of horseback].

Anyway this ugly cunt was stupid enough to be videoed slapping and kicking a horse after snapping because it didn’t do as it was told, maybe she wanted the nag to stand still so she could give him a good blow job or some thing and he said no thanks love ive had better, imagine being this loons boyfriend, i bet he’s shit scared of this bitch.

The best bit is this twat is a nursery school teacher from Moulton Mowbray , where they are obviously still a little bit in the stone age, so i would imagine its ok there for her to practice her Genghis Khan style of infant teaching [ kind of reminds me of the school full of crazy teachers i was in in the 80,s, they would all be sacked or in prison nowadays]
I wouldn’t want this red faced tart with permanent menstrual tension anywhere near my kids, they would be scarred for life and probably gay after spending all day with a violent woman who smells like a horses stable and has a hair trigger temper.

The horse should be given the opportunity to return the favour, now that i would like to see, slag running would be much more entertaining than fox hunting….but im sure that would be made illegal, oh hang on a second isnt fox hunting also illegal.

What’s good for the goose, you guys know the rest, Sarah Mould is a treble cunt…

And seconded by: Captain Magnanimous

Sarah Moulds is a cunt, isn’t she.

This is the foxhunter woman who hit and kicked her horse when she thought nobody was watching but was caught on camera.

Moulds was out with her dressy-up reptiles on a ‘hunt’ when the incident happened. She repeatedly slapped and kicked her horse in a horrible burst of violence.

Ironically, it transpires that this animal-abuser is a primary school teacher. Does this aggressive coward punch the kids in the head five times like she did the horse? A horse that is an innocent animal forced to go on a hunt with these chinless rats.

If this was the other way round and the horse had attacked this bitch, the horse would have been put down.