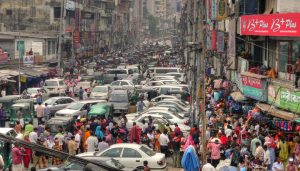 I was watching a YouTube documentary about one of the most dangerous roads on the planet: The Nawabpur Road in Dhaka, capital of Bangladesh. It is the 4th most densely populated city in the world and the tenth largest.

Compare and contrast Dhaka to London.

Dhaka is also one of the most polluted cities on the planet, and just looking at the thousands of knackered out buses, TATA lorries, taxis and private cars, most of which are well over 30 years old and would all fail an MOT if such a thing existed.

There’s is a highway code, but no one bothers with it; lots of drivers don’t have a licence or insurance. Barely anyone stops after a RTA, and those that do can often bribe traffic cops to look the other way.

But this particular road also has one of the highest fatalities on the planet purely because of congestion, pollution and a lack of any form of traffic management.
19 million cunts tightly packed into a sprawling dungheap of a city, most of them living well below the poverty line. But they have to scrounge a living as best they can with the least government environmental regulation and law enforcement as possible.

Fuck knows what their carbon footprint is, but I bet it isn’t as low as the UK’s. And yet I doubt if Greta and the XR/IB mob will be remonstrating with Bangladesh authorities because it doesn’t serve their purpose of world attention.

Never mind the 19 million trying to earn a crust while living with poverty, starvation, destitution and respiratory diseases. And governments there and world governing bodies like the UN and WHO just stand idly by letting it happen.

Instead  let’s just focus on the First World, and force them to make all the sacrifices, even though most of Western Europe and North America are already bending over backwards to comply.

On a wider scale, here’s a list of the 25 most polluted cities on the planet according to one report. Now I know you can quite easily find a particular report to suit a particular narrative, and when I did a Google search for the most polluted cities, there wasn’t much in the of the way of consistency. But then again everyone with an agenda will pick and mix statistics to suit.

And to give some contrast, here’s a top 10 of the least polluted cities from the same report.

(Interestingly, Greta’s place of birth, Stockholm, didn’t make the top 10. Or even the top 25. Funny that!)

Greta and XR, where are you?

72 thoughts on “Welcome to Dhaka!”