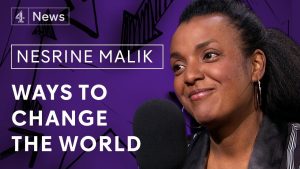 “British hypocrisy is to blame for the deadly plight of migrants”.

That’s right cunters; we express sorrow at “tragedies” such as the death of would-be surf-boarder Abdulfatah Hamdallah from Sudan, we “make the right noises”. But we are “complicit” in his fate (and the fate of others) by voting for politicians who “pledge to make routes into Britain unviable”.

So there you have it. We display “cruelty” to migrants, because we don’t like the fact that anybody from anywhere thinks they can pitch up on our doorstep and expect to get in. We’re “blocking off safe routes to asylum” apparently, in spite of the fact that Britain grants entry to thousands every year, and has been doing for donkey’s.

So who’s making these assertions then? Well you can read orl abaht it in the good ol’ “Groaniad”, the nation’s favourite arsewipe rag. Who specifically in that comic?. Why one Nesrine Malik (bootiful British name); er, a Sudanese-born, London-based (you guessed it) journalist, and “expert” on matters pertaining to race, class, gender and Islamophobia.

Yes, Malik has sniffed out our British prejudice and bigotry alright; it’s really quite amazing how she’s managed to put up with us for so long when she could very easily head back to her native Khartoum and act the gobshite about how terrible it all is back there. Might have something to do with the fact that she’d quite likely get her head in her hands to play with if she did…

No, it’s just a much cushier little number to stay in benighted Blighty on a nice little earner, lecturing us all on how intolerant we are. Gosh, we really are a right bunch of bastards. Thank goodness Nesrine, that we’ve got people like you to come over here and set us straight.

61 thoughts on “The World According to Nesrine Malik”