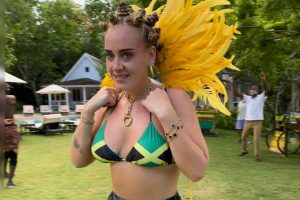 Adele tweeted a photo of herself from her L.A. mansion of her in a Jamaican flag bikini and her hair in Bantu knots (that ridiculous hairstyle that makes your head look like a sea mine) to celebrate what would have been the Notting Hill carnival, which has been cancelled due to the Flu Manchu.

Aaaannnddd the Leftwaffe immediately took to twitter to accuse her of cultural appropriation.

FUCK…OFF! Fuck all the way off!

And point of order, there are WHITE Jamaicans. Some of them have the same accent as black Jamaicans. They are all part of Jamaican culture, because they all consider themselves Jamaican. And not a single Jamaican has complained about Adele. So, if they’re not offended, no fucker else has the right to be offended.

Apparently a lot of celebrities, and others have jumped to her defence. Naomi Campbell and Alexandra Burke have defended her and, to my complete amazement, that well known moron and race baiter, David Lammy. And let’s face it, when even an ignorant twat like Lammy jumps in on the side of common sense, you know the Leftwaffe are on a loser.

So, you woke motherfuckers. Shut the fuck up. Like it or not, she actually knows more about that culture than YOU ever will, because she was raised in it. It’s her heritage. And like I said, if Jamaicans aren’t offended, you have no right to be offended. And my Geordie mate would say, “howay and shite”! Cunts.