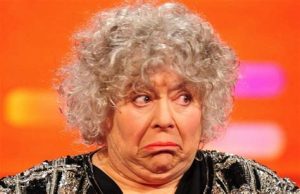 A beef-curtain cunting for that detestable lezzer, Miriam Margolyes, who recently blurted out on ‘The Last Leg’ (whatever the fuck that is) that she wished death upon Boris when he contracted Coronavirus – but then had the cheek to back-track her statement so doesn’t look like “the sort of person that wants people to die”. Not that this matters, particularly – liberals have a long and colourful history of wanting those to do not conform to their deranged way of thinking to perish, or to suffer in some unimaginable way.

This rug-munching, spherical rent-a-gob is renowned for her deranged, left-leaning stance and is no stranger to sticking her nose into other peoples’ political beliefs – like the time she had the audacity to ask countless Americans who they were going to vote for during the run-up to the last election, and if they said Trump, she would pounce and berate them instantly.

If she isn’t in favour of our PM and his party, she can pack her shit and fuck off to Australia (as she holds duel citizenship), so she can be right where she wants to be – deep in the bush.

Miriam Margoyles is a cunt isn’t it?, this hook nosed harpy has said that she wished that Boris had died of Coronavirus, I’m not a particular a fan of the duplicitous cretin that is Boris but I wouldn’t wish death upon him either, it seems to me this rug munching creature is so blinded by her hatred of anyone who is not okay or supportive of her views and deviences, deserves an excruciating death, also she’s made a career of being a ‘professional Joo’ such as on Stanley Baxters Christmas box, to name just one of many, also playing a fucking sheep on the film Babe, so all I can say to Miriam is “Baa fuck you”!!!

Miriam Margolyes
A ‘learn when to keep your trap shut’ cunting for fat twat Remoaner and Labour luvvy Miriam Gargoyle.
Over the years Gargoyle has been at pains to establish herself as a character; an English eccentric and a bit of a raconteur. Viewers of the Graham o’ Norton chat show circuit will be familiar with her twinkly-eyed, ‘ooh aren’t I awful’ line of artful, knowing patter. Though obviously contrived, it was a mildly amusing routine once upon a time, but repetition quickly reduced it to being merely tiresome.
Of late the not-so-lovely Miriam has also established herself as an equally unamusing, tubby little hypocrite. She’s announced to (you’ve guessed it) ‘The Groaniad’ that she’s ‘not happy in England. There’s so much hatred, and that’s because of Brexit’. So much hatred? And this from the gobshite who recently said that she ‘wanted him to die’ while Boris Johnson was in intensive care fighting to stay alive. Irony is obviously not Gargoyle’s strong suit.
Well I can see a couple of options for you then, you charmless wally. Firstly, you could fuck off to Australia, where you hold citizenship, hopefully never to darken our doorstep again. Or you can stay on in your swanky London (of course) home, living your champagne socialist lifestyle, and setting yourself up as a target for the rest of us to rip the piss out of. Either way, you’re a first class cunt.