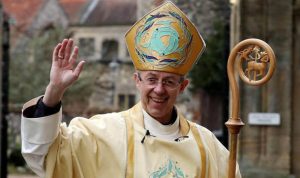 Below is the latest virtuous hand-wringing coming from this clown in fancy dress.

‘The Church of England is “still deeply institutionally racist”, the Archbishop of Canterbury has said.
The Most Reverend Justin Welby said at a meeting of the Church’s ruling body, the General Synod, that he was “ashamed” of its history of racism’

He’s found, or imagined another woke pile of bullshit to apologise for. Perhaps he would be better grovelling about sex abuse, persecution, anti-Semitism, and good old homophobia. Throw in mention of Anglican missionaries role in enabling colonisation and slavery. Stake burnings perhaps?

Seconded, I was about to cunt him myself for the same virtue signalling.

He had advantages as a white, straight, educated man, he said, adding: “I’m not ashamed of those advantages; I’m ashamed of not knowing I had them. And I think that’s where we probably need to start.”

The General Synod voted unanimously to lament and apologise for the “conscious and unconscious” racism it showed to members of the Windrush generation and others, many of whom were turned away by Anglican churches or faced discrimination from parishioners and clergy.”

A Christian not living up to Christian values, shocking.

Like spending millions on church roofs whilst the poor remain hungry, like being a very rich organisation preaching abstinence to the poor? My question to the archbishop is, “Why have you chosen to highlight this fault in your church when there are so many others that are equally, and in many cases, much more problematic issues of morality staring you in the face? Could it be you want easy virtue-signalling points and you want the black folk in your church, and not not attending the church’s they’ve established successfully for themselves?”

Tell you something top bish, them black folk you want in your church most likely don’t believe you believe in Christ, any more than you care about the poor.