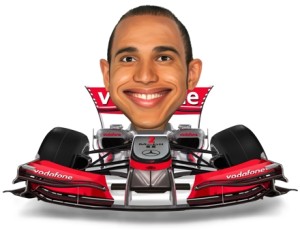 Now I’ve not watched F1 much since the days when Michael Schumachers biggest rivals were Damon Hill and Mika Hakinnen and also I’m more of a bike man than a car man, anyway…..

Lewis Hamilton irritates me, moreso than any sportsman I’ve heard of for several reasons.

1) He is a monumental whinger. He is Nigel Mansell MkII. Nothing is ever good enough for him and he seems to think the world owes him something.

2) People like to point out that he came from a normal background. Sorry to piss on that parade but the man who has won more races and championships than any other in F1 is the son of a bricklayer and another F1 champion Kimi Raikonnen is the son of a man who drove steamrollers so unless those professions pay a lot more abroad than they do in the UK, Lewis isn’t unique in the “normal” stakes.

3) He moved to Switzerland for “privacy” – now we know he went there to avoid tax and to be fair I don’t blame him. I’d do the same but I’d also just say “I’m moving to a tax haven because I don’t see why the UK government should take 50% of my earnings when they didn’t contribute a penny to my career during the years while rising through the ranks”. Simple. Also people who value privacy don’t date a woman who was in a pop group known worldwide and continues to be in the public eye to this day.

Lewis you may be an awesome driver but you drive a Mercedes and that (and the above), my friend, makes you a womans front bum.