I wish Chris Evans would hurry up an have a heart attack. I’m sick of seeing his stupid cunt face, the run up to the new Top Gear has had him in the ‘news’ daily.

Now, with the first show aired, the big debate is on: Namely, “is he a bigger cunt than Clarkson”? My answer is always going to be YES. Evans has, and always will be a cunt of the first order, annoying to the point of torture. I didn’t watch it last night, and I will never watch it while that prick has anything to do with it.

How bad were the scripts that they had to get Danny Baker in to improve them? It is going to be a show about the ginger cunt, his cunt cars and his cunt showbiz cunt mates. FUCK OFF YOU GINGER TWAT!

Dr. “Jizzer” Clarkson at least knew what he was on abite…Ginger minger was on the front page of some rag the other day…convinced he’s going to die in some car fuck-up, or something.

Surely it’s time to slam both Top Gear formats into the armco.

Jeremy “what d’you mean there’s no hot food I’m gonna punch some poor cunt” Clarkson, Blue Peter presenter candidate Hammond and Catweasle lookey likey posh nob May are well over due to be trailered to the scrapyard.

Each series pretty much the same as the previous. Rich cunts driving some cool cars in great locations, having a jolly up on my tv license fee.

Whether this forced Amazon defection is a success or not, I’m sure the audience is likely to be more foreign than domestic. Amazon fire stick! Fuck off.

Not sure the Beeb’s revamp will rock the viewing figures either. Ginger cunt Evans and his school boy humour is a sure fire reason to reach for the remote.

The new Top Gear deserves a cunting. Those far left cunts at the BBC, and their associates have had to grovel today, after performing donuts and other stunts at the Cenotaph. Every British adult in the country knows what the Cenotaph is, and what happens there every remembrance Sunday. So I find it puzzling, especially after what happened with that little shit swinging on a flag a couple of years ago, that anyone would think it appropriate to film some cunt fucking about in a high powered car.

This just proves, as if any proof were needed, how little respect the traitorous lefties at the BBC, and those who make TV shows for them, have for this country, and for those who died to give them the freedom to be the cocksuckers they so obviously are. I was willing to give Top Gear a chance, even with the ugly, arrogant carrot top, Evans hosting it. Now they can fuck off. And I’m not alone. A lot of former service personnel used to watch that show, they won’t be now, nor will a lot of other people.

The fact is, Top Gear worked because of the three hosts. And because, unlike other shows from the Blatant Bollocks Corporation, it wasn’t politically correct. In fact, it showed a lot contempt for PC, and those who live by it. Which is why Danny Cohen hated it. It’s a simple fact that the extreme left Danny Cohen despised Clarkson for his right wing views, and was looking for an excuse to get rid of him. It’s also a fact, that Clarkson stupidly allowed his ego to give Cohen that excuse. Cohen fucked up in thinking that he could simply replace Clarkson, and Hammond and May would go along with it. He was very wrong.

This new Top Gear will be a shadow of its former self. It has too many presenters for a start. Led by Chris Evans, whom I have yet to hear anyone say a good thing about. Evans is an arrogant little shit who genuinely thinks he’s God. It will be filled with similar things that the original TG had, only with a left wing slant to it. And that’s why it won’t work. Most ordinary people are not lefties. We’re not particularly righties either. We just don’t share the same dumb as fuck politically correct view of the world that the shitheads at the BBC have.

Despite Clarkson’s constant baiting of motorcyclists like myself and general disdain for enthusiasts of vintage machinery (also like myself) I did enjoy Top Gear while it was on but we’ve just dispensed with the TV licence anyway so the Beeb can stuff the new version up their “collective” ringpieces. The twat (along with those other overgrown schoolboys, Clarkson and May) treats cars like they are toys to be played with… Hammond pisses about at 300mph, yet when he crashes there’s a wave of tabloid inspired sympathy and a deluge of grief monkeys… Fuck that. My brother was hit (and killed) by a car.

So if Hammond endangers his life by acting like a dick in a speeding motor, then he deserves all he gets…. 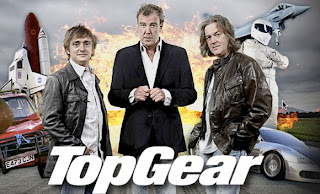 Top Gear is a cunty program featuring 3 complete fucking Cunts who fancy themselves but just twat about. Gets right on my fucking tits, Cunts.