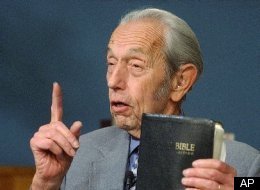 Harold Camping, the daft auld Americunt evangelical broadcaster who predicted that last Saturday would be Judgement Day and who now says he miscalculated and Armageddon will be upon the Face of the Earth on 21st October 2011 which is TWO DAYS BEFORE MY FUCKING BIRTHDAY you daft auld loon. I have laid in caviare and champagne and pre-paid whores and everything at great expense so if he is right I’m going to sue the daft auld cunt.

Nominated by Blind Pugh
Harold Camping is a cheating,lying, mountebank, who steals the money of
religiously deluded American simpletons with his so called mathematical analysis
of the holey babble.
He’s now fucked up twice already with his cuntish calculations.
And still silly Americans have not the ability to recognise him as a dyed in the wool cunt
Seconded by hellosnackbar