Rent-a-gob celebrity has been all the rage for some time. Recently, it has become derigeur amongst the millionaire class of Hollywood and the arts world, collectively aligned against the Tango Man.

Over the past few days J Kunt Growling has waded into another Twatter spat against him.

She accused him of ignoring a three year old disabled boy called Monty at an event.  She stated on Twatter he could not “bring himself to shake the hand of a small boy who only wanted to touch the President.”  She wrote the display was “stunning” and “horrible,” calling the president a “monster of narcissism” in a series of seven tweets. She spewed forward a tirade of abuse against him.

Here is the rub. It turned out she was WRONG and The Donald had in fact interacted with Monty.

So after facing a Twatter and social meejah backlash she apologised to Monty and his family. Good you may think. However, she did NOT apologise to the Tango Man. She only deleted the tweets after the storm of condemnation.

This sanctimonious storyteller does not have the manners and decency to apologise to the subject of her criticism and abuse. She cannot bring herself to undertake a simple act of contrition.  Her tweets of lies and abuse were re-tweeted 75,000 times by her followers.

I wonder what ‘Jack’ ( or whatever he/she is called this week) Monroe thinks of gobby Growling’s behaviour? After all ‘Jack’ sued Katie Hopkins for a mistaken tweet meant for someone else. Here we have J Kunt defaming the President of the US of A, without any justification and still has (and does) not apologise to him.

This is what we have come to expect from a woman who holds the warmongering and crooked Killary Kiloton in such high esteem. She is also a Barry Obummer groupie. Additionally, her great wisdom of all things political is shown by her sycophantic love of the EU.

She applies to geopolitics her simplistic knowledge of who and what she THINKS are good and evil from her childish books. She should stick to writing mind-numbing fairytales and leave politics and real world issues to the grown-ups. Living in a world of fantasy and fiction, so it would seem, she doesn’t need to let facts get in the way of a (fake) story.

I have just one question for J Kunt. Who is the narcissist in this true life story?  I recommend she looks in the mirror for the answer.

As the clock runs down to the UK invoking article 50 let’s see how many liberal Cunts start virtue signalling? J K Rowling started early this morning on her twatter account saying how sad she feels today?? There’s a little picture of a young girl in a union skirt letting go of both an EU and Scottish flag balloon!!

Felt sad since 2004 when the EU gave accension for 10 mostly poor unwanted countries to join the club!!

I’ve felt sad with the millions that have come putting an unbearable strain on housing and the NHS!!

I’ve had 24 years of feeling sad that we were conned into a two bob wannabe superstate!!!

So J K Rowling your fuckin sadness is my delight!! 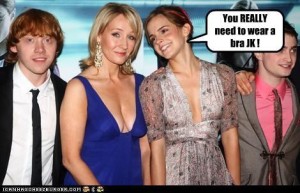 Rowling is a massive cunt. The hag is milking the Potter cow dry. The way she feeds ‘revelations’ to the disgusting Potter fanatics is pathetic. These cunts whipped themselves into a frenzy just becuase JK ‘revealed’ that Dumbledore was queer. A decrepit ancient 100 old wizard is gay? It doesn’t even add to the (already shit) story.

It’s just this silly bitch lapping up the arselicking off the Potter geeks because she knows they hang on every bit of bullshit that comes out of her mouth.

Maybe she should say ‘A golden prodigy has a fall from grace, becomes a right bastard, and he has a name beginning with V? Yeah, I did nick Vodlermort from Darth Vader….’