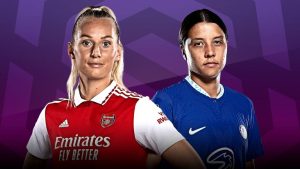 But this isn’t a cunting on the basis it is shit, or how the BBC push the agenda to brainwash the easily led into thinking everyone is watching women’s football…except them, so maybe they had.

No, this is a cunting for this lady footballer Emma Mukandi who feels as a ‘professional’ athlete they are being victimised by men who make the rules on them popping out sprogs, and how it may inconvenience their club and their ability to actually do their jobs, so think the maternity leave and pay is somewhat ‘unfair’

Apparently, so she says, it ‘must have been made up by a man’

Her further comment of ‘”Bear in mind our body is our job, who even came up with that? Surely not someone who’s played football and had a baby. Is that a man? It had to be a man. A man was definitely involved in that.”

Yes, love it’s your job and if your body is your job, then you don’t get pupped up to compromise that job. It’s different if you are a desk based pen pusher…your performance is barely affected by having a kid (I prefer child, but it’s her word not mine) But surely she is no so thick to realise the one thing that earn her money- her body- is the one thing you shouldn’t be compromising on. Sure have a ‘kid’ but realise it will affect your body and possibly your future performance- whether a male has made the maternity rules or not. There’s a history of sports people doing things not relating to work, that has compromised their work performance- or insurance companies have forbid them to do so.

And then we go on to Claire Rafferty.

Another woman footballer, who now doesn’t believe it is ‘right’ that physios, sports nutritionist and the like, who are employed by clubs at vast cost to improve players performance, should take into account a woman players weight as part of that assessment- just in case a player is mentally so weak they ‘may’ get an eating disorder. Sorry, didn’t Emma Mukandi just state your body is your job???? Can’t have it both ways love…….either clubs take an interest in fitness and the well being of your body, as quite rightly it is not only important to you, but also the club, or you don’t want them to and let you go out and pig out on shit food and beer every night. If you are that weak that having your weight taken because you are a professional athlete gives you metal issues, then you are in the wrong job.

Never heard Gascoigne moaning what he was putting on some timber and being called a fat cunt by the opposition…….maybe this stupid tart would prefer that instead of others taking an interest in her health. Fuck me, I am sure she would be the first to complain, if she were dropped from the team 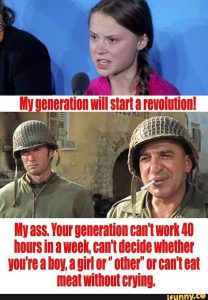 Ms. Fetal Alcohol Syndrome herself has been up to no good again.

This time, the millionairess grifter trudged of to Germany to protest the expansion of a coal mine. It seems the sausage eaters are doing this to relieve the costs imposed on families trying to heat their homes in winter.

Well, this bag of shit turned up and got herself forcibly moved on by the rozzers. Should’ve battoned the bitch.

Yes, you see Greta ‘the science is settled’ Cuntberg is demanding the lederhosen wearing shit eaters keep paying a fortune to protect the millionairess’s ‘future’.

Will she be worrying about putting her gas on? Which no doubt she does.

Fucking turn off all the power to this cunt’s life. She die of shock at not being able to Tweet some bollocks after 10 minutes. If not, the spoilt little cunt would freeze to death on the first cold night. 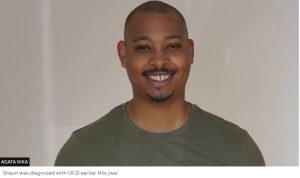 The BBC (again) and it’s agenda.

”I was afraid to talk about OCD as a black man”

That was the headline. So, curious as to why, yet again it was so much worse for blacks I had a look. And guess what, although this person is undoubtedly black, nowhere in the text is there any mention of ‘as a black man’ Just his mental state.

So some cunt at the BBC is pushing an agenda of lies. Pursuing a race angle where there isn’t one. I wonder why?

You wont see the headline which drew me to it but I cant find anything in the story to back up the claim. 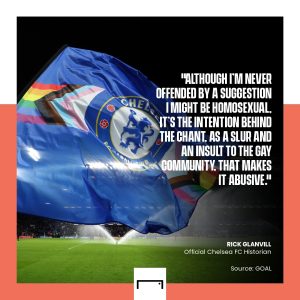 With the promotion of the gayness at football matches, we now have fan groups consisting exclusively of gays. ‘Gay Gooners’ for example.

Now if a gay wants to watch football, more power to him (they, them whatever the fuck nonsense). It seems though, the can’t shut the fuck up about their sexuality. ‘Ooh look at me I’m a gay!” Who gives a fuck? Keep your depraved antics to yourself.

Well now it seems singing the ‘Chelsea rent boy’ chant is to mean getting turfed out and banned. And before you say it’s the lefties not so much the gays, I’d argue against that, as I’ve seen interviews with these fan groups demanding an end to such chants. But yes, lefties push for this too.

I’d argue it’s not even ‘homophobic’. It’s a chant claiming that such and such an ex Chelsea player is a male prostitute.

Football is dying anyway, as all traditional chants get you done nowadays. “Who’s the bastard in the black?” That’ll get you turfed out. Swearing? Told to be quiet by the stewards and the fucking Tarquins who now attend games. Stand up? Told to sit down.

It’s so gay, which is why they come in droves to games now, as well as shitty arses.

I wouldn’t like to be the dad at the game whose young son asks what ‘gay’ means when he sees the banners everywhere, as well as why he needs to celebrate it . “Well son, it means that you must celebrate it when you know of a man who puts his pee pee up another man’s shitpipe.”

And they should use something more representative of their lifestyles than a rainbow flag. 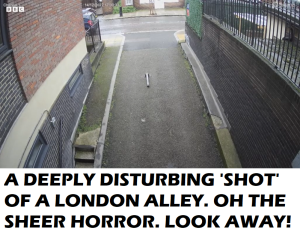 The MSM nannying up to an overtly ‘sensitive’ population.

Many times I have watched news reports on disasters, accidents, trauma and the like. I don’t know about you, but we must have been made of sterner stuff back when I was young in the 70’s- I admit, I found the maggot looking aliens with the green slime in an episode of Dr Who with Jon Pertwee a ‘bit’ frightening…but we didn’t have warnings, before, during and after the episode about how scary it may be for their audience.

Now, however anything in the news that may be more ‘frightening’ than saying ‘boo’ to a goose is flagged up to warn viewers beforehand.

Personally, I think this is really getting out of hand. Below is a prime example of this bollocks to see what I am talking about. Seriously- if this is disturbing to a viewer, then they shouldn’t be in control of their own bowel movements or have knives in the kitchen…or watch early episodes of Dr Who!

I watched this (and like most videos on MSM with a warning) I waited and waited for the disturbing scenes…..and they never transpired. Seriously, if you find this disturbing then fuck me we haven’t a hope if we go to war.