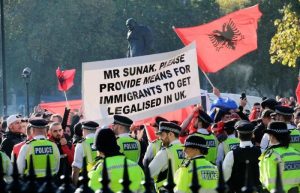 Albanian protestors in London today 12th November, demanding that we respect their human rights and relax the laws to allow in thousands of their brethren (could they be relaxed any further?).

Many of them were draped in the Albanian flag, but not the flag of the country where they now reside and demand everything under the sun. Well fuck off back there then, your country needs you.

P.S Given Albania’s WW2 record, neither desecrating Churchill’s memory nor complaining about being called “invaders” would seem appropriate…

And on the same subject there’s this from Fuglyucker

Albanians are cunts, this country is flooded with foreigners who come purely to leech off the system that us muggs pay for, to the point now the the system is completely fucked, and we can’t use it,.

But get this, these fuckers are protesting about rememberence day and how dissatisfied these are about being here and how badly Albania has been treated by the UK.

I have the answer, take your hourds of dishonest crooks and fuck off home you cunts and raise hell at home, fuck off with my blessing…

And Uttercunt isn’t happy with the Albanians either

This is a brief one but set my piss on steam mode.

They claim they are fleeing persecution but are flying said countries flag. That’s like leaving an alleged abusive relationship and showing off a picture of the person accused and declaring love for them.

They have zero right to be here and all need to be removed fast. Don’t delay beaverbutt , or whatever your name is, get the pukes out. And make sure the Albanian crooked government pays their flights.