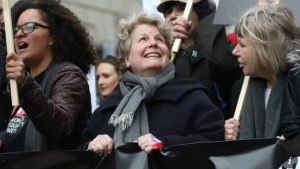 “I want to recognise that your line of questioning is transphobic and it opens up trans people to violence by not recognizing them.”

‘The author and comedian told Justin Welby: ‘This is a serious matter. The lives of LGBTQ+ people are at stake here.’

The former quote from a ‘professor’ of Black Studies. To which Josh Hawley quite rightly asked ”is this how you conduct your classroom’? ‘You cannot ask a question for the fear of provoking violence?’

Same with Sandi. She says she’s had death threats from fundamentalist Christians because she’s LBTQ+

A lot on the Left are resorting to this now. Shutting down debate by accusing people that voicing traditional opinions on male and female biology and different ‘sexualities’ may cause violence.