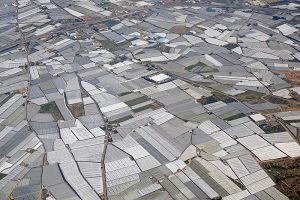 There are vegans who think that by not eating meat or other animal products they are being active in saving animals.

The opposite is true.

Without people eating animals those animals would no longer exist.
Farmers would not keep pigs, chickens, cows and sheep just to look at them.
They wouldn’t bother feeding them.
They would turn the pasture areas of their farms over to crops to feed the increasing number of vegans.

The only way that anyone would be able to see a farm animal would be by going to a zoo.
But of course, zoos are cruel places.

To add credibility to their ridiculous dietary fad vegans now claim that they are saving the planet.
Perhaps they think that their fruit and vegetables are grown and harvested by happy country folk who enjoy working in fields, singing songs while they toil away and having a lovely outdoor picnic at the end of the day.

The motorway through Almería is not a pleasant drive.
The E15 A7 is the Autovía de Mediterráneo.
It is a long road.

There are parts of it where the scenery is spectacular.
The mountains, valleys and viaducts.
But for the most part the view is quite depressing.
From the city of Cartagena in the Murcia region to the province of Málaga in Andalucía there is an almost continuous vista of plastic greenhouses.

For hundreds of kilometres there are hundreds of thousands of huge greenhouses spread from the coast to the foothills of the mountains.

On some stretches of the motorway that is all you can see.
Some of these greenhouses are bigger than football pitches.
Many millions of square meters of plastic.

This plastic does not serve its purpose for long.
It needs to be replaced, especially after storm damage.
Hundreds of square acres of the stuff has to be dumped every year.

Between and around these hideous structures you can see old, derelict caravans which house the greenhouse workers.
For the most part foreign immigrants working illegally for starvation wages.

Some call this vast area The Salad Bowl of Spain.
It’s more like a toilet bowl in my opinion.

That is the price that must be paid to have some smug, pasty faced vegan put an avocado on his plate in the middle of winter.