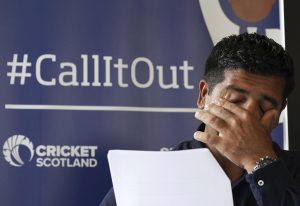 I had no idea they played cricket in Scotland.

Turns out they do and they play racist cricket, more racist than Yorkshire even. So bad the board have resigned in shame.

One of the boards former members was wringing his heart about the systematic racism and micro-aggressions he had uncovered. He sounded like a guardian reader from London to be fair. This was an interview on Radio 4.

The interview went on for around ten minutes and systemic racism, and bigotry was mentioned many times and his 400 odd examples he had. It was odd because he never gave a specific example.

The above is not the reason for this cunting, it’s merely the trigger. It was the first of two stories about racism, the second being about new regulations to ban misbehaving football fans who make monkey noises etc.

The media can’t get enough of it, politicians can’t virtue signal enough and can’t make enough laws to tackle the racist indigenous white sub people they have the misfortune to attempt to govern and RE-EDUCATE!

The question I’d like answered by the political class is as follows.

How and when did we get so racist?

Was it when you flooded the county with immigrants without bothering to ask the people of the nation? You changed the demographics and peoples lives, communities and culture overnight.

Was it partly due to people watching their communities disappear to the point they had to move because they couldn’t find anything they recognise as food and had to travel a few miles to meet someone else who spoke English?

Could it have anything to do with services and infrastructure crumbling because the investment needed to support an engineered population explosion was never made?

Could it be that those in Greater London only saw more tax income and lower wages for the plebs as a good thing not giving a thought to those parts of the country whose industry was destroyed by government and the remaining jobs were outsourced to China and the third world?

Could it be you choose to interpret peoples rightful sometimes misplaced resentment over what you’ve done to this country as racism and/or bigotry to beat them even harder?

Will one of our so called leaders answer these questions? Of course they won’t. They would have to admit their part in the destruction of a nation and a culture.

This shit didn’t happen by accident, governments know the impact of mass immigration, failure to integrate etc. it’s all in the history books.

Shortly after all the people of this country sacrificed so much to fight for Britain and our way of life you took a massive shit on us and you’re still shitting.

Please show me the manifestos or policy documents or even a speech where you told us this was what you intended……….

Worst of all you blame us and call us racist.

We call you Cunts.

80 thoughts on “Scottish Cricket is Racist”