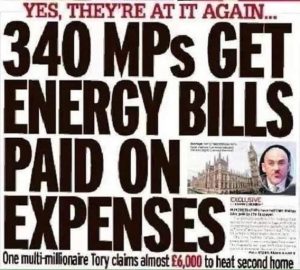 Seems that these cunts can claim expenses on any energy used at their London and/or constituency homes. In other words they don’t have to worry about the massive price hikes for electric/gas/petrol that the rest of the country is having to tolerate and will have to tolerate for the foreseeable future!

The Telegraph link below shows a number of prominent MPs who have claimed back many thousands of pounds in energy bills and yet no one seems to give a shit, not least the MPs themselves or the so-called government watchdog – The Independent Parliamentary Standards Authority – who decides on ministerial salaries and expenses.

OFGEM announced yesterday that the Price Cap would rise by another 80% from October 1st, with another 40%+ rise projected in January. This will be absolutely devastating for a vast majority of people – except for the rich, the virtue-signalling celebs and the political establishment – all of whom constantly whine about nasty old fossil fuels and the wonderful benefits of Net Zero and how we must all make sacrifices for future generations and saving the planet.

But since all of these entitled cunts can use as much gas, water, electric and petrol as they want without having to watch the pennies, I just wonder if they follow their own diktats?

Basically they’re doing all the things they’re telling the Great Unwashed not to do, just so long as they’re not footing the bill or making those very same sacrifices themselves.

This is just another example of the class divisions between the Establishment and the Masses, with the former totally out of touch with the realities of their myopic decision-making is having on the latter.

If paywalled use this link https://12ft.io/