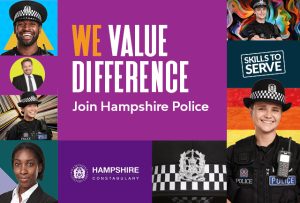 A nomination for Hampshire constabulary and modern British policing.
Is this what it has come to?

A man -army veteran – arrested for causing ‘anxiety’ to someone online, namely via Facebook.

Luckily Laurence Fox decided to record this sickening event for the benefit of the British public. The corporate media have avoided mentioning any of these cases, including the Harry Miller case mentioned by Fox,. The anger in his voice is palpable. These officers are now known, and i’m sure their identities will be shared around by some resourceful ex-servicemen.

I really wouldn’t want to be them at the moment.

Seconded by: Cunt Me In

Burglary is difficult to investigate. It’s far from impossible but still difficult.

The same can be said about catching a violent shoplifter. This “crime” however was a nice and easy investigation for them. It involved very little paperwork and made the force’s figures look good.

This man never should have been arrested. All they needed to do was send a PCSO round to give ” suitable words of advice”, but that wouldn’t be recorded as having solved a crime.

I know a couple of retired coppers who say it was the best job in the world. Now the force is full of kids with no life experience, and no idea how to communicate with the public, who couldn’t fight their way out of a paper bag!

In fact with the way the police are now, there’s never been a better time to be a criminal!!

Sick of it, isn’t too pleased either.

Not sure if this has already been posted, at first I thought it was fake news but seems it actually happened.

From what I can gather it stared with Lawrence Fox making a meme of 4 pride flags to make a swastika (looks quite good) and very appropriate because it you are not in tune with LGBTQxyz you will be shot and your body hung from a lamp post.

A bloke retweeted it and was subsequently arrested by 5 police officers for causing someone anxiety, yes anxiety, which makes me wonder why someone with such a low threshold of anxiety would be on Twitter anyway.