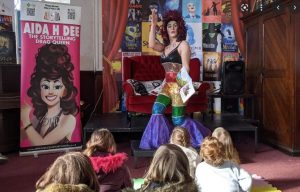 The Telegraph (Telegraph News Link) states that the project is run by Sab Samuel, a 27-year-old male children’s author, who performs as Aida H Dee in a sequined dress with heavy make-up. The classes, which begin at Reading Borough Council libraries on July 25 and will involve 3,000 children, claim to “teach inclusivity” and encourage attendees to “get fabulous”.

It seems that some parents are not buying into this new orthodoxy (you know the one, where 2 + 2 = whatever the fuck they say it does), and are not completely relaxed on the idea of their children being indoctrinated by deviants in dresses.

Some have tried to block book tickets to prevent the shows from going ahead. Oxfordshire County Council defended the upcoming drag sessions in its libraries as “appropriate and well-suited for the advertised age groups”.

Phew, that’s a huge relief, ‘cos we can always trust a LibDem / Labour / Green coalition to uphold normal heterosexual family values, so no worries there, then.

It seems that the parents (or some other unnamed clandestine organisation) have been branded …wait for it… (drum roll, please) a “far-right neo-Nazi group” by Drag Queen Story Hour.

So, let me get this straight: parents who have perfectly legitimate concerns regarding teaching young children about ‘gender fluidity in childhood’ because it might skull-fuck them, are conflated with a fascist regime that repressed free speech and indoctrinated an entire nation? Hold on, that sounds suspiciously what premium-grade cunts like Drag Queen Story Hour and those zealots that push the trans agenda are up to…

Our lauded national broadcaster took a different tack (of course), applauding the fact that the drag act goes on despite all the hate mail:

The BBC are coy on the exact number of hate mail and the content, but I imagine some of them were fucking hilarious.