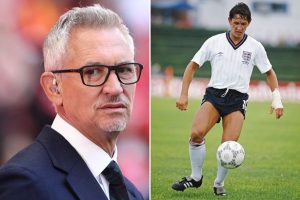 Gary Lineker – “I suffered racist abuse for my ‘darkish skin’ when I was a boy”. Yes poor Gary was bullied for being a bit swarthy looking at school and into his professional football career. Methinks any name calling dished out were for being a smarmy know-it-all gobshite and arsecrawling around teachers. He grew up in 1970’s Leicester, are you telling me there were not enough Indians and Pakis to go around?

If he thinks he is in line for some social media brownie points and reflected victimhood from the Left he is going to be shit out of luck, sorry to break it to you Talcum X but I can’t see a white man, even a high priest of the woke cult like Lineker getting away with this without the Left turning on one of its own. Even if he gets only half the abuse JK Rowling did it will be glorious to watch with a massive dose of schadenfreude.

There is a pecking order cunt truffle, and in the eyes of the left, straight white men are bottom of the pile. Maybe Vernon Fox or MNC could volunteer to kneel on his neck for ten minutes to add more authenticity to this brewing shitstorm?

And then there’s this from Cunty McCunt

It wouldn’t surprise me if Lineker suffered abuse for being a lefty, hypocritical, virtue-signalling cunt.

He might’ve suffered abuse for being a smarmy, patronising, condescending cunt.

In all likelihood, he’s suffered abuse for being an underworked, overpaid, sub-talented BBC acolyte cunt.

Or, perhaps, for using-his-employment-via-a-state-broadcaster-to-push-his-own-woke-political-agenda cunt.

Could even have suffered abuse for his tax affairs: Standard News Link

Maybe, even, he’s suffered abuse for being a self-pitying, publicity-hungry cunt.

But I find it extraordinarily difficult to believe that he’s suffered abuse for having darkish skin. Largely because he doesn’t.

Freddie the Frog isn’t too happy with our Gary either…

So now our wokie hero has come up with a fantastic sob story about being a victim of……….wait for it………raaaaaaaay-sism !! Oh yes the great Gary, as white as my arse, apparently has always had a “dark skin.” Really? Fucking news to me Gary. There’s either something wrong with my eyes or I need a new telly.
Oh yes, at school, poor Gary was a victim of incessant racist abuse and even suffered during his playing career …….”I’m not going to name names.” Of course you’re not Gary, because you’re a fucking liar.
Have you ever heard such a load of bollocks? At least Sparkletits has actually got a black mother. Fuck off Linekunt you fucking pathetic hypocrite wanker.

You beat me to it Freddie. Here’s a link before Admin finishes his wank and starts whingeing.

Fucking hell, here’s another for Billy-No-Crisps, courtesy of Duke of Cuntshire

Gary Lineker.
This jug eared twat has surpassed a level of wokeness that is off the scale.
The virtue signalling cunt is now claiming that because he has a dark complexion, he suffered racial abuse.

Who is the fucking idiot sucking up to this time? The only person I can think of Meagain Hewitt.
Both whites and blacks will be killing themselves with laughter at his latest fuckwittery. Do everyone a favour Lineker, regardless of their skin colour.
Fuck off.