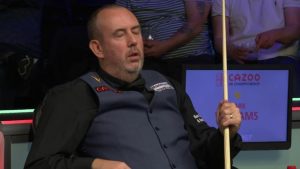 I’ve been watching a bit of this year’s World Snooker tournament. It’s been pretty enjoyable overall.

However, I keep hearing (pundits mostly, but a few players too) saying this player or that player is ‘tired’ or ‘fatigued’.

Their ‘job’ is to do what some of us pay to do as a relaxing leisure activity. They get paid very, very well for doing this too (if a top player at least.)

I don’t bemoan them that. They’re very talented people and have practiced and perfected their games after years of effort.

What? For about a 2-3 hour session of okaying snooker? Maybe another one in the same day after a 4 hour or so break? Six hours a day max? Some days off during the competition? Some days with just one session (about 2-3 hours usually.)

Fucking playing snooker for a very nice living and you’re ‘exhausted’? For a sport where you walk, stand still or sit for a couple of hours a day, with loads of time off. And if you need anything grabbing a ref gets if for you. Fuck, when I play it AFTER working all week, my mates and I even spot our own fucking balls, score the games and rack the balls. And we’re not tired after 5 hours and 8 pints. Some of the old fatties in the working men’s club snooker room are not exactly athletic either.

Did I miss something? Do these ‘poor likkle snooker pros’ now need to do 50 push ups before every shot? Are these millionaires worrying about their bills? Maybe when the other guy’s potting away, they need to do star jumps with weights attached to their arms and legs? Maybe I missed Mark Williams carrying a full brickie’s hod around the arena? Does Judd Trump need to scale the Crucible walls to get in via the roof and walk down the stairs on his hands every day?

99.9% of people, if they had such a talent, would snap their fucking hands off to have such a cushy job.

You shouldn’t believe your fucking luck!