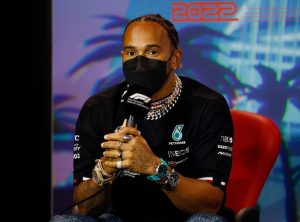 Whatever happened to Lewis Hamilton?

When Hamilton first appeared on the F1 scene, I had a lot of respect for the guy. He was Mr Average made good – a nice normal ordinary guy with a talent that propelled him to the top of his game through dedication and hard work.

OK you may have a penchant for jewellery Lewis but nobody needs to wear three fucking watches at the same time. But then again it does get you right down there wid de kids init.

He’s objecting to the FIA ruling against wearing jewellery while driving.

Well let’s hope the FIA do a Djokovic and ban the cunt. Rules is rules. You no like, you no play. Simples.